Hybrids are a big thing in Pakistan nowadays. From Fit Hybrid to Toyota Prius to Vezel, you will find hybrid cars on the city roads of Pakistan everywhere. I have even seen a hybrid Toyota Crown Athlete on the roads of Islamabad. I remember when in 2007, a friend of mine was looking for a used Honda Civic, and while sifting through the car dealers, we came across a 7th generation hybrid Honda Civic. I asked him why not go this hybrid Civic, and he said, “Bekaar gari hai yaar. Koi jaan hi nahi.”

Later I heard people complaining that not only the car is underpowered, but its hybrid system was a failure as well. And soon we started to see the influx of those previous generation Toyota Prius cars. They were hideous, to say the least, but they used to work. No one complained about them being underpowered or their hybrid system (Hybrid Synergy Drive) being inefficient.

The hybrid system in Honda cars is called Integrated Motor Assist or IMA for short. This type of the system is also known as a parallel hybrid. Let’s talk about IMA a little that how it works. And later, how it differs from Toyota’s Hybrid Synergy Drive (HSD).

Honda introduced its hybrid back in 1999 in Honda Insight. Later, it was introduced in other models as well. Civic received IMA in 2001-02. It had a tiny 1.3l engine. Honda’s Integrated Motor Assist is kind of amazing if we are being honest. It’s another debate that it didn’t work as well as they had hoped for, initially.

The first generation of hybrid Civics (2001 to 2005) was just bad. Instead of a proper electric motor, they just had a giant started motor, pretending to be the electric motor for the hybrid system as well. You couldn’t run the car solely on the electric motor because it was part of the combustion engine.

Honda improved the second iteration of their IMA and increased the output around to 20% while reducing the overall size of the system 5%. Also, the three stage i-VTEC internal combustion engines used for these hybrids were quite clever as well. The engine has variable valve control system to adjust valve lift and timings in real-time according to the driving conditions. Suffice to say that the cams and cam lobes are quite a complex piece of engineering, making them operate in a precise manner. In previous engines, the valve control worked as a switch, either it was on or off. When you are not moving and idling, the system will turn the engine off, but as soon you release the brake pedal, the engine turns on. When you speed the car up, since the electric motor is between the gearbox and the engine, the electric motor works as a secondary support system for the engine and provides instant torque.

The real magic happens when you are cruising. The engine’s combustion stops and only the electric motor is running. The valves stop opening and remain close, making the cylinders sealed shut. This is done to prevent any sort of friction and pumping loss (up and down movement of the piston). Fuel is also cut off. So you can say the engine keeps on running but without any fuel. No fuel means no bang. This closing of the valves and halted combustion also happens when you are slowing down. It is also the time when battery packs are recharged through the same electric motor. The motor becomes an electric generator (regenerative braking). This is what the IMA is, in brief. You can say the theory behind Honda’s IMA was to reduce the size of the engine, making it less thirsty, but combine it with an electric motor that can assist the engine when hard acceleration and speed is required. So now you have a smaller fuel efficient engine, but with an electric motor to use as an instant power boost when and where required. I must say; I think it’s kinda cool.

Now let’s see how Toyota’s Hybrid Synergy Drive system works. It is simple; there is a motor, and there is an internal combustion engine. Either they work together or on their own, depending on the driving condition. It is called a series hybrid system, compared to Honda’s parallel hybrid system. And that’s it. This is all that Synergy Drive is…well not really. At least that’s how it used to be. The newer hybrid system of Toyota is also quite complex.

The system itself was a bit basic in its initial iterations. However, it has gone quite complex as well. Currently, Toyota’s hybrid system is in its third generation. And this system works both as series and parallel hybrid systems. At the time when third generation hybrid was launched in Prius, Toyota claimed the car would do 100 kilometers in less than 4 liters. Cruising range was also improved; in a full fuel tank, from 1000 km to 1150 km.

Toyota Hybrid Synergy Drive system in Prius basically contains two motors, to put it simply. One is a generator that is used to charge the batteries directly through the engine when it’s running but is also used as the starter motor for the combustion engine. The generator keeps on generating electricity coupled with the engine, depending on the needs of the power system. The other motor is an electric motor that is used to drive the car on battery power but can also recharge the batteries during deceleration (regenerative braking). It is mounted in conjunction with the transaxle in order to drive the car. 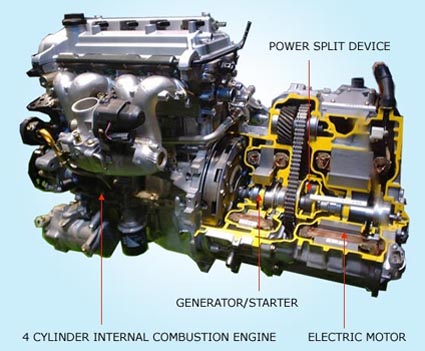 When you start the car, the power control unit keeps the engine off, and you take off just on your electric motor powered by the battery. That is why you don’t hear anything when you see a Prius creeping on the roads. It’s only being driven by the electric motor (EV mode). During slow driving conditions when the engine kicks in, the power from the engine is used directly to drive the wheels of the car. It is also where electric motor supplements the combustion engine in order to provide smoother power delivery while maintaining the maximum fuel efficiency. But when you fully press the throttle for rapid acceleration or going up the steep hills, engine and electric motor both fully kick in to provide maximum power and torque. And just like in IMA, when you decelerate, the process of regeneration occurs and you charge the batteries with the help of the electric motor. But this isn’t the only way when batteries are charged. Prius’s power control unit can turn the petrol engine on to charge the batteries if required. The ICU become the source of kinetic energy to turn the generator for charging. That can happen even if the car is not moving.

This is basically how Honda’s and Toyota’s hybrid system differ. The philosophy behind both systems is to assist the combustion engine, whether it’s full power mode or slow speed cruising. Honda has tried to make the system as compact as possible, installing one motor to act as the generator and electric motor to drive the car. Toyota has two motors. One is a starter motor and a generator, and the other is an electric motor to drive the car as well as a generator under regenerative braking. Toyota’s system completely shuts off the combustion engine, but Honda’s system makes the combustion engine go into a kind of a hibernation mode where its internal components are moving inside, but it’s not making any power. Since it’s completely turned off, Toyota’s engine takes time to kick in. Honda’s engine instantly kicks in when you need it since it is already running but without fuel for combustion cycle. I hope all of will help you understand the hybrid systems a bit.