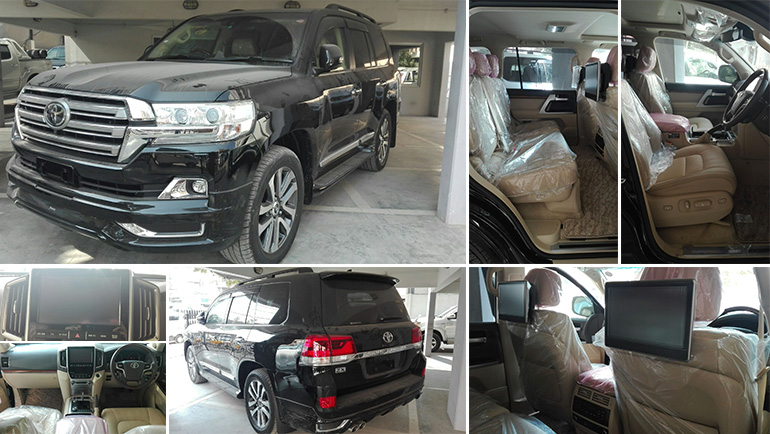 Toyota is trying to shift around its SUVs in different segments (mostly upwards) to take a piece of the luxury SUV market by positioning the Land Cruiser Prado, where Land Cruiser used to be in previously and push the Land Cruiser upwards to fight the Rolls Royce of SUVs, the Range Rover. The others within the segment of luxury SUV market also includes Porsche Cayenne, BMW X5, Mercedes G-Wagen, and there soon will be Bentley and Lamborghini SUVs as well. And if rumors and spy pictures are to be held true, even Rolls Royce will be coming with their own SUV.

Perhaps the BMW X5 or the Bentley SUV do not come with the same heritage of 4x4s as do the Land Cruiser and Range Rover but while the later has forever been the reigning champion of the luxury SUV segment, the Land Cruiser was always known as the conqueror of lands. Now though, you can conquer lands draped throughout in luxury in the new Land Cruiser ZX.

This particular example is said to be the first facelift Land Cruiser 2015 ZX, the most premium Land Cruiser there is, to be imported in Pakistan. Land Cruiser has always enjoyed more popularity in the countries which has larger rural areas and less urban environment like Pakistan in addition to it being the NATO vehicle of choice. Because it always works.

The pre-facelift Land Cruiser was criticized to be bland in terms of styling, as Toyota wanted to use the 4×4 pedigree to take a chunk of the luxury SUV market but it wasn’t sharp enough nor did it have the same level of fuel efficiency as the premium European SUVs. Thus, the changes may not look a lot but there have been many.

Toyota’s officials have called it a ‘partial redesign’ in stead of a facelift and when you look at the front of the new one, there’s a new three-bar grille, a reshaped hood, redesign LED headlights with day-time running LED lights as well, and a restyled tailgate as well. All these exterior changes transform the overall look of the vehicle towards much improvement.

The interior has also been refreshed with new switches, and displays have been gathered and grouped by function in the center cluster. Six LED-backlit meters convey the status of the vehicle at a single glance. Hairline decorations also adorn the meter board which, along with improved textures, now features a 4.2-inch TFT color LCD screen.

This Land Cruiser ZX, which has already been sold, with just 41 KMS on the clock has an interior combination of beige and with the exterior color being black.

The engine is a 4.6 litre V8 petrol motor producing 318 hp at 5,600 rpm and 460 Nm peak torque at 3,400 rpm. It is mated to a 6-speed automatic transmission that drives all wheels with some amazing off-road ability thanks to its architecture and traction control technology.

Built like a tank and looks so much better than the previous model, I think this country’s love affair with the Land Cruiser just received a refresh.

Here’s a brief comparison between the old (pre-facelift) and the new (facelift) model. Click on the images to enlarge.

PakWheels Bikes Section Can Help You Sell Or Buy A Bike