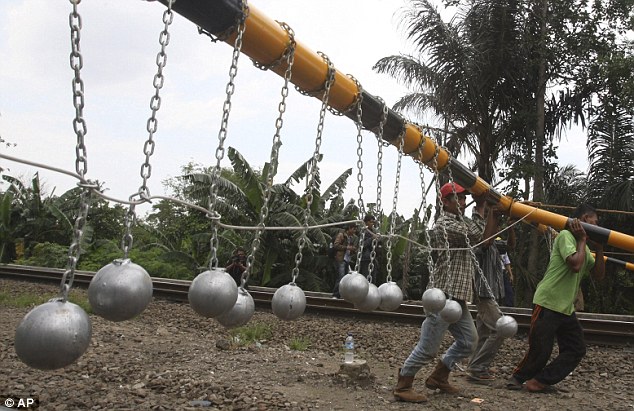 Instead of improving the railway network, bringing more trains and increasing traffic to actually answer to people’s desperation of riding on roof-tops, Indonesian government has decided to hang grape-sized balls made of concrete over their railways track to stop people from riding on roof.

It has in the past used various other, non-deadly means to stop illegal roof-riding by throwing red paint and unleashing dogs but this though, is an extreme step which is potentially very deadly.

Mateta Rizahulhaq, a spokesman for the state-owned railway company PT Kereta Api, said: ‘We’ve tried just about everything, even putting rolls of barbed wire on the roof, but nothing seems to work.

‘Maybe this will do it.’

The first of the concrete balls have been installed above carriage height near a station outside the capital, Jakarta.

Trains that travel across Indonesia on poorly maintained tracks originally built by Dutch coloniser six decades ago are usually packed with passengers, especially during rush hour.

The poor people who are unable to afford tickets are forced to ride on the roof-tops while on such traveler said that while the authorities have tried everything, he doesn’t believe that will work as well.