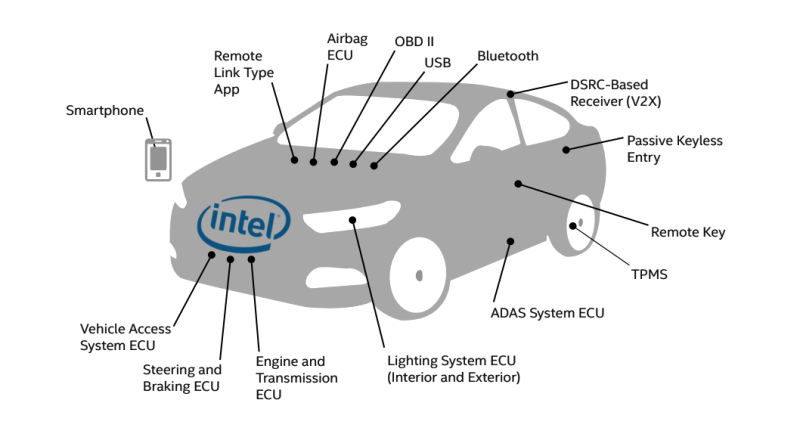 Heard of a company called Intel? Their products exist in all forms of technology we use everyday; from our smartphones to our PC. Intel has a huge contribution to the electronic items we use daily in our lives, and that includes cars as well so the company began an investigation into ways in which cars can be hacked, and thus created methods for making cars hack proof.

Recently, car hacking became a great concern among the public, while car manufacturers began recalling millions of their vehicles due to the fact that their vehicles can be wirelessly hacked and once hacked, the hacker can take full control of the car which includes control of the steering and the throttle.

“Computer attacks are now a clear and present danger for car users, dealers, manufacturers and suppliers. Computer security joins reliability and safety as a cornerstone for consumer confidence and continued success in the automotive industry.” Intel stated

The company has already released a series of practices that car manufacturers can follow in an attempt to make their cars safer from the threat of hacking. The basic points of interest Intel outlines in the report are as follows:

a. Hardware security, to prevent intentional or accidental damage to the systems of the car.

c. Cloud security to insulate ongoing and real-time updates to the car and ensure they don’t jeopardize the system.

d. Supply-chain management to ensure the safety and security of the physical components going into the vehicle.

The main focus point of the report is to find a safe and secure way to authenticate information and signals when components of the car communicate with each other. And to make sure the signal is not coming from an unauthenticated external source. This is done with pre-approved components and creating clear pathways with strong protection. Supply chain security is also a big focus, with Intel encouraging that safeguards should be developed at every level of the vehicle’s design and manufacturing.

Each operational area [of production] should do ongoing risk assessments independently from the others and implement controls appropriate to local operations. However, it is recommended that each area also invite peer reviews by representatives from other operations to enable coordination among functions and to promote sharing of best practices. With next-generation cars, these layers [of security] include hardware-based protection in and around the ECUs, software-based in-vehicle defenses, network monitoring and enforcement inside and outside the vehicle, cloud security services, and appropriate data privacy and anonymity for bumper-to-cloud protection. The key tenets of data privacy and anonymity must be safeguarded while ensuring the security of the automobile .

So what’s happening here is that cars are no longer just mechanical, the cars are using more data than ever to make your drive comfortable, you entertainment better and what not, and these systems, will be forever prone to hacking so while we’re still stuck in ancient technology of cars, you best stay updated how far the world has progressed.

Mercedes-AMG V12 Supercar Is In The Works

2016 Honda Civic Launch Expected To Be In September Next Year