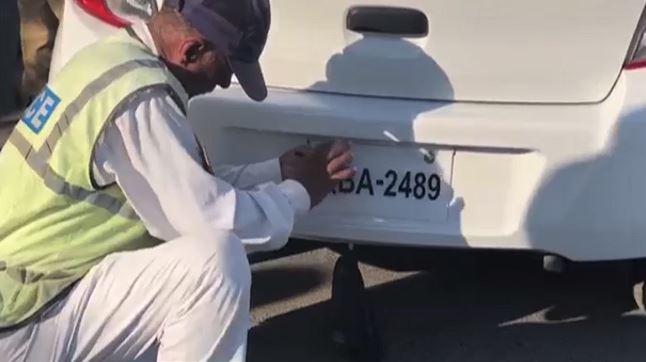 As per the details, the police issued 20 tickets to people who were using fancy number plates on their vehicles. A police official while talking to the media said that the authority had warned drivers with illegal or fancy number plates in advance, however, they continued using such number plates and that’s why Karachi Traffic Police conducted the drive in the city.

The police issued tickets worth up to Rs.2,000 to violators. Note here that the authorities even fined a driver of a former CM. This showed Karachi Traffic Police was applying the law across the board, an official said. Police have once again urged the citizens to use the official number plates issued by Excise, Taxation & Narcotics Control Department, Government of Sindh, to avoid inconvenience.

Read Also: No registration or transfer of vehicles without biometric verification in Islamabad

Moreover, City Traffic Police Lahore have also announced harsh penalties for those using illegal or fancy number plates on their vehicles after 1st February 2019. Citizens must use the number plates issued by Excise, Taxation & Narcotics Control Department, Government of Punjab, to avoid getting into any kind of trouble, the authority asserted.