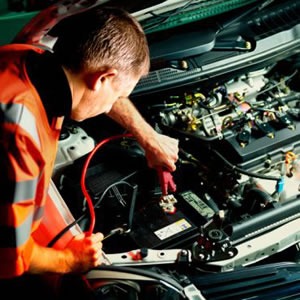 Three years back I got interested in analyzing the procedure which is used by battery maintenance shops. They purchase Sulphuric in drums and then mix it with tap water in 66 % by volume. They say that chemical reaction causes the water to boil which remove the oxygen molecules from the mixture hence results in giving up gravity of 1250 which they pour it in car batteries.

Batteries run fine for minimum 2 years where as I think if it is all about removing impurities from car batteries then they are making a mistake by adding tap water which would off course boil the water but would not guarantee the removal of impurities present inside the water. I have six batteries of 200 Amps each in my office which can support 15 computers during heavy load shedding. In order to overcome the Myth, I have also purchase a drum of Sulphuric Acid and have mixed it with distilled water which I have produced it in my own lab. I took all my batteries outside and have flushed it with tab water to remove all the deposits present inside the batteries. Flush was performed multiple times then batteries were refilled with Acid of 1280 gravity prepared within my office compound. From last three years I have been maintaining the gravity of my UPS batteries up to 1280 by mixing the acid and distilled water as required. Even at the end of third year my batteries are able to provide 90 % backup time as compared to the time of purchase, even after excessive load shedding of 1 hour’s; 5-6 times a day from last three years. Flush is a periodic exercise which is performed at least once a year also I have adjusted the output of my UPS to charge per battery at rate not more than 8 Amps.

Similar procedure was adopted on all my three car batteries which have been running fine without a problem from last three years with mileage more than 80000 km each.

I would not recommend you to try this procedure as tremendous amount of heat is generated during the mixing process which can easily damage any individual who is doing this for the first time and also you have to leave the mixture in Plastic bucket for completed one day to allow the mixture to cool down.

Normally you would have noticed that once you have purchase new batteries then after three months backup time reduces drastically and normally batteries are taken to batteries shop where they charge you minimum 500 Rs for fixing the batteries and charging it on Tanger. If you have hydrometer then you would notice that this happens either due to decrease in volume of liquid inside you battery or specific gravity of mixture inside the battery is below 1200.

Normally people make a blunder of putting tab water inside the battery which directly affects your batteries back up time or try to purchase the battery fluid from local battery shop at Rs 10 or Rs 15 per bottle which is nothing more than distilled water and I have my doubts that the water is not properly distilled.

I would recommend you to keep the mixture of sulphuric Acid with you all the time with gravity of 1280 which should be poured inside the batteries if you notice the drop in specific gravity of Acid inside the battery and secondly you can produce the distilled water inside you home if you have a pressure cooker. Place a small pipe on top of pressure cooker where you can divert the stream from pressure cooker to a plastic bucket and hopefully if pipe is bit longer then you will get distilled water at other end.

As far as battery flush is concerned, this can be done once a year by draining entire acid from battery and then inserting the tap water inside the battery and draining it for multiple time because this would remove the deposits in between the plate and from bottom which will eventually kill your batteries. Then you can fill the batteries with fresh mixture of Acid. Never pour pure sulphuric acid inside the battery and if you have prepared the mixture of sulphuric acid with a procedure which I have told you then allow the mixture to cool down otherwise you will not like the results. Normally people recommend that flush be performed with distilled water but I believe that it won’t be readily available in such a large quantity so reserve it for later use.

Secondly I would like to highlight that people at time drain the acid from the battery and after performing the flush. Pure a mixture of (Espom Salt + distilled water heated at 66 C temperature) inside batteries and then shake the batteries so that mixture can make its way to every cell. They allow the mixture to cool down and then put the batteries on slow charging of 4 Amps for about 24 hours in order to remove the Sulphate deposits from the batteries. This procedure is used to recondition your old batteries which can still provide you with an output of 10 Volts minimum and then batteries are good enough for one more year. You will have to discharge and recharge it for multiple times. After a day or two then perform another flush and then pour the new mixture of acid onside the battery.

Entire purpose to highlight the entire procedure was to outline the mistake which our Laymen technicians make at battery shop. They prepare the Mixture of Sulphuric Acid by mixing it with Tab water which eventually produces a lot of heat where they claim that this in turns creates a mixture of Sulphuric Acid and distilled water with specific gravity of 1250. (Wrong Procedure) as the impurities directly attack the cell of your new car batteries and reduces the life to ½.

I bought 20 Liters drum of Sulphuric Acid for 400 Rs which should be enough to produce mixture for 5 washroom Baltis of Acid. 1 balti would be consumed for one 200 AMPS battery.

1) Always pour Acid on distilled Water not distilled water on Acid
2) Wear Rough Clothes, Glasses and gloves if possible.
3) Keep the Acid and Mixture out from the reach of Children
4) Lot of heat would be generated during this process & be very careful.
5) Always Use plastic balti not Metallic
6) Mixture will take 24 hours to cool down
7) Never pour the mixture inside the battery once it is Hot
8 ) 64 % distilled water should be Mixed with 36 % Acid
9) You may end up getting a gravity of 1400
10) Keep hydrometer with you and only check once fluid has cooled down
11) You can perform later adjustments by pouring more distilled water on the mixture once it has cooled down and at that time no heat will be generated.
12) Use 2 Liters pepsi plastic bottles to store the mixture
13) Label it “Very Dangerous Sulphuric Acid with Gravity blah blah “
14) Keep it in safe place where no one other then you can touch it
15) Balti used for producing the mixture should never again be used for taking bath.

1) Entire exercise will have no meaning if you are not using distilled water.

First of all whenever you buy a UPS then ask the technician to adjust the charging rate to MAX 12 AMP & MIN 8 AMPS. Secondly buy a hydrometer along with the batteries and ask him to provide you with a Plastic bottle (size of 2 Liter Plastic Pepsi bottle full with Acid with gravity of 1280). Perform a Periodic check on your batteries (2 months for Brand New & 2 Weeks for OLD batteries) with hydrometer. If your gravity is between 1250 to 1300 then pour the distilled water inside your batteries and if gravity is less then fill it with the Acid purchased. I have noticed that for some reason the gravity of UPS batteries never remains same and for this reason it does not provide you with same backup time.

Always remember that if you have lost the liquid level inside your battery and forgot to refill this then probably your batteries have experienced a heart attack and it would be difficult to recover it back to its optimal performance. In your case you batteries have experience a heart attack along with excessive over charging for long period of time as your UPS has been trying to charge your batteries at @ 25 AMPS while trying hard to bring the Voltage back to 14 Volts.

Charging a battery at @ 25 AMPS means that you are wasting power which should comfortably be able to run 2 home air conditioners. Your case is a typical example of what many people are doing these days. You can try the procedure which I have highlighted above but looks like you will have to buy new batteries.

Meera’s fan names his new design after her or not!