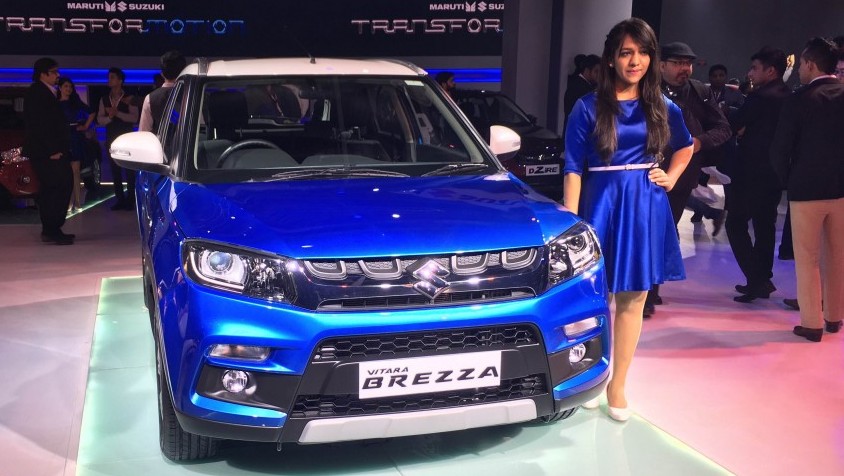 Maruti Suzuki unveiled its Maruti Vitara Brezza, a compact SUV today at the Auto Expo 2016. This is Maruti Suzuki’s first complete in-house production and was developed by Maruti engineers. Indian market already has cars like Mahindra TUV300 and Ford EcoSport competing in the same segment. The Vitara Brezza will have a tough competition ahead.

Maruti Suzuki has planned six variants for this compact SUV.

Features such as ABS with EBD and two front airbags are available on the Vitara’s Z variant and optional on the L/V variants. Top of the line ZD+ comes with Suzuki’s SmartPlay infotainment system. Maruti Vitara Brezza will come equipped with 16-inch alloy wheels, LED daytime running lights with projector headlights, and turn signals integrated in the side mirrors.

As far the power plant is concerned, this compact SUV will be available with the 1.3-liter four-cylinder DDiS diesel engine. According to the reports, the engine is capable of producing a little under 90 BHP at 4,000 rpm. The torque is rated at 200 Nm at 1,750 rpm. So there will be tons of usable torque in a city driving as well as for some off-roading. Vitara’s diesel motor comes mated to a 5-speed manual transmission.

Suzuki Vitara SUVs were imported to Pakistan back in the day. In those days, Kia was offering its Sportage compact SUV in Pakistan as well. Since Pak Suzuki is looking forward to adding new models to their current line-up, a new Vitara can sell well, considering mini-SUVs like Vezel are quite in demand nowadays.

New Honda Accord Hybrid Revealed At The Auto Expo 2016