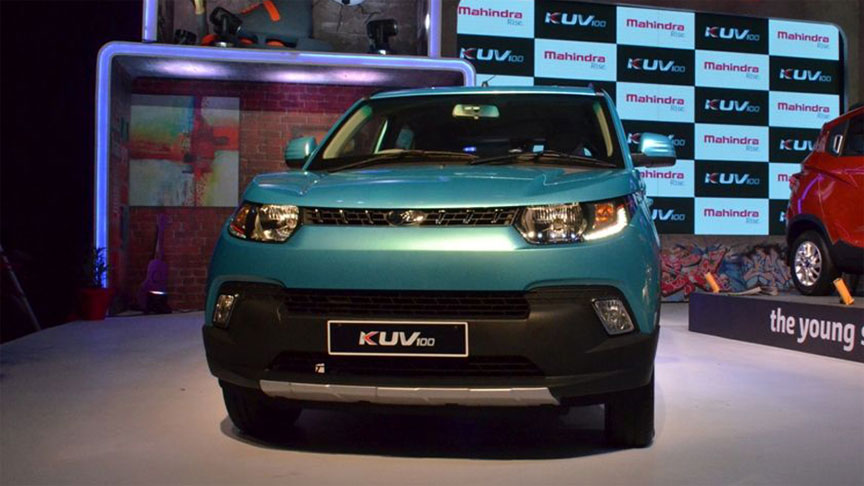 At the time when Pakistan’s auto policy has started a tug of war between the Japanese and European car makers, and the dream of Pakistan’s very own automobile seems to be shattering, India has achieved new milestones when it comes to localized car production. Considering the popularity of SUV vehicles all around the world, the Indian car manufacturer Mahindra and Mahindra has introduced India’s first Compact SUV named KUV100 (Kool Utility Vehicle 1 Double Oh).

The SUV has been designed in Mahindra Research Valley in Chennai and is assembled in a factory in Chakan, Maharashtra. This is Mahindra’s third vehicle in sub 4 meters category after the TUV300 and Quanto.

Also Read: Thinking Of Importing A Car On Your Own In Pakistan? Here Are Few Ways That Help!

KUV100 is priced from INR 4.42 lacs (approx 7 lacs PKR) to INR 6.76 lacs (approx 10.5 lacs PKR) depending on the variant. You can control the entertainment system and check relevant alerts of KUV100 with Mahindra-developed application Blue Sense from your smartphone as well.

Watch: The Indian Version Of Pimp My Ride Putting Lambo Doors On A Baleno

The KUV100 doesn’t have a direct competitor as far as India’s car makers are concern, but Maruti Suzuki Wagon R and Maruti Suzuki Ignis, Ford Figo and Hyundai Grand i10 are its closest rivals. Mahindra’s executive director Pawan Kumar Goenka believes Mahindra has introduced a new definition of SUV class of vehicle with their new KUV100.

Lamborghini Catches Fire, And Why I Avoid Giving Cars To Valets In Pakistan