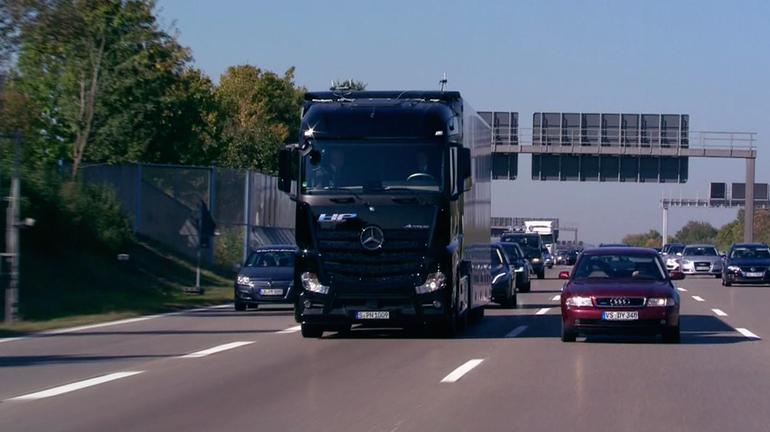 Mercedes Truck Drives Itself On The Roads Of Germany For The First Time!

Imagine seeing a truck driving beside you but without a driver?! I personally would be quite startled at the fact despite knowing that it is a self-driving truck made by Daimler, the parent company of Mercedes Benz. The Germans trusted the truck a bit more than I do since, it was  was equipped with Daimler’s pioneer ‘Highway Pilot’ software and successfully navigated 9 miles of busy German traffic. Though as a safety measure, the driver was there to take over all the time.

According to sources, the self-driving truck had been tested in a wide range of simulated highway scenarios up until now, and the results were pretty amazing. The self-driving technology has already been worked on by a lot of automakers but this brings us to beginnings of a new era for eco-friendly long-distance trucking. While the highway pilot system does require a human operator to take over in the event of an unforeseen bad weather or surprise roadwork, its cultured system still allows a fairly comprehensive autopilot.

How does the roust machine actually work? Daimler explains that the highway pilot system includes front-mounted radar, stereo cameras and active speed regulators that all work in conjunction with a human operator. The multi-sensors of safety systems and general assistance allow the truck to continually observe the entire area in front of the vehicle and to take control of it in certain situations.

According to Yahoo news, Mercedes autopilot truck includes adaptive cruiser control and hands free steering. It also has features which allow for an impressive reduction in the harmful emissions, all thanks to efficient gear shifting. 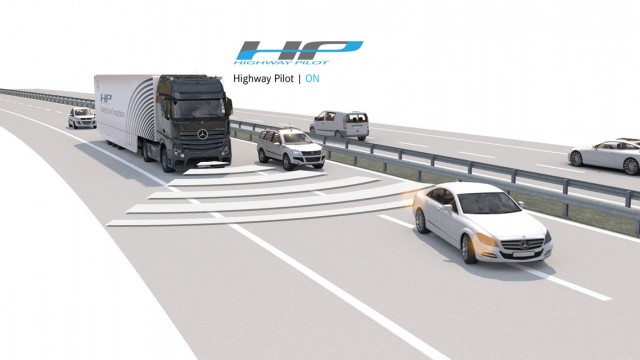 One of the major reasons for such innovation by Daimler was because accidents on highways takes place due to exhaustion and subsequent increase in driving hours which in the end reduces awareness and fatal incidents occur. Daimler here surely proves itself for being a socially responsible automaker by not just helping to reduce accidents but by also reducing toxic and harmful emissions.

Although the automakers admit that self-driving trucks are long ahead in the future but it still is going to provide thrills to the already discovered self-driving technology.