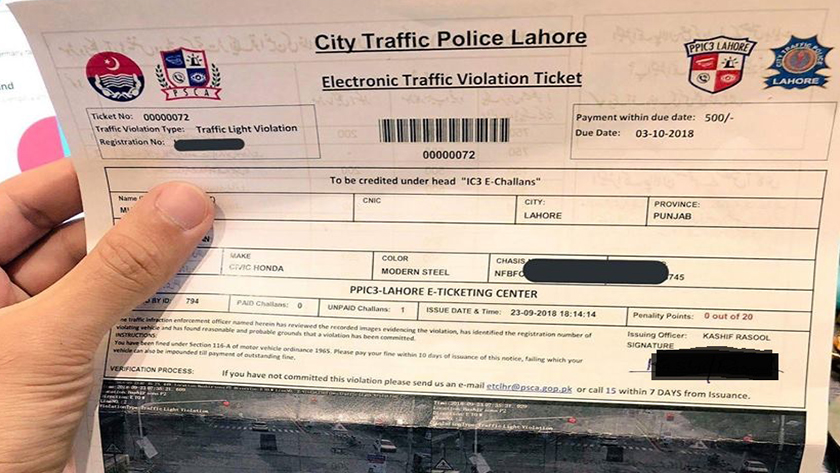 Punjab Safe Cities Authority (PSCA) has issued over 4.4 million e-challans in the last two years. The authority has deposited Rs339 millions in the national exchequer as payment for e-challans.

The data shows that the police handed over 2.2million and 90,000 e-challans to motorbikes, out of the total. Meanwhile, it issued 2million and 75 thousand e-challans to vehicles. The authorities also challaned over 85,000 commercial vehicles in this time period.

Furthermore, the number of fatal accidents has also decreased by more than 40% due to the police’s strict actions. According to an international website Nambeo, Lahore’s traffic index has improved by 91 degrees.

The credit to this positive progress is maybe because of several improvements in the traffic police department.

Additionally, the top brass has announced incentives to encourage the officers. A few months ago, Lahore’s Chief Traffic Officer (CTO) launched a ‘points system’ for the on-duty traffic wardens.

Under this system, the department will reward the officers, according to their performances. As per reports, the system has led to more strict rules on roads and stern action against the traffic laws’ offenders.

Earlier in July, Lahore Traffic Police launched a strict action against bogus, unregistered, fancy, and improper number plates on both cars and motorbikes. In a tweet, the police announced the crackdown in the metropolitan city.

The police launched this operation after a large number of citizens started using tampered or green color number plates to escape the law and evade E-Challan. The Chief Traffic Officer (CTO) Lahore, Syed Hammad Abid, said that officers are authorized to impose hefty fines on violators. “The officers can also impound the vehicle and lodge an FIR against the lawbreaker,” CTO said.

Police set up checkpoints at all major roads of the city, including entry and exit points of Lahore. “Police will strictly deal with the violators,” he said.

Only citizens with authentic excise slip proving that they have applied for number plate would be spared during the operation.