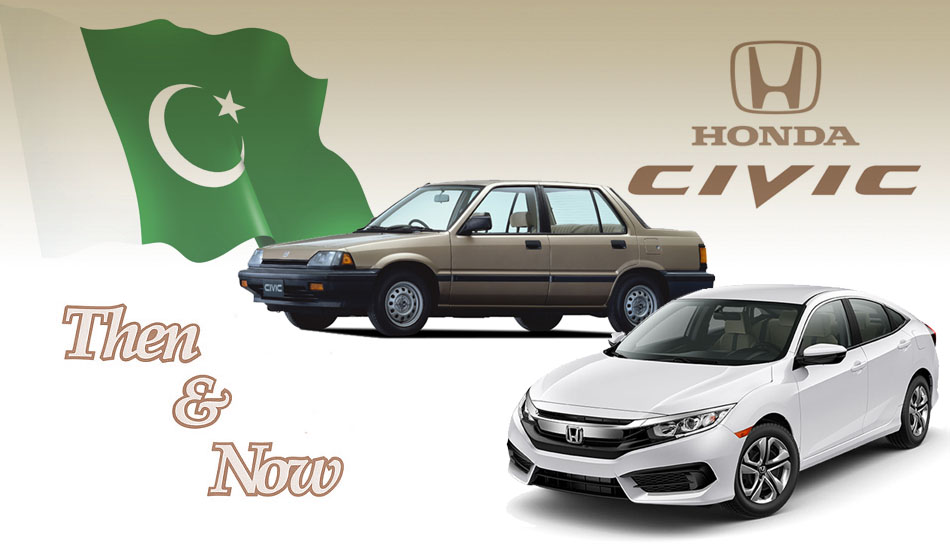 Civic has been a very successful car from Honda ever since its production kicked off in the early 70s, and has been the oldest competitor to the world’s most popular vehicle, the Toyota Corolla. Like in most parts of the world, the Civic has a long history in our country too. First appearing on our roads during the late 70s, the Civic used to be a subcompact hatchback, but it was the early 80s which actually saw the rise of Honda Civic in our market.

Also Read: 1980s: An Era Never Remembered For The Variety of Cars That Pakistan Had

By the time the 2nd generation Civic debuted in 1980, Honda had already surpassed its status as a niche automaker. With sleeker body design and an increased wheelbase, the Civic came with a 55-hp 1.3-liter CVCC engine in our market, in both sedans as well as hatchback forms. CVCC, which stands for Compound Vortex Controlled Combustion, was the state-of-the-art reduced emission technology by Honda. 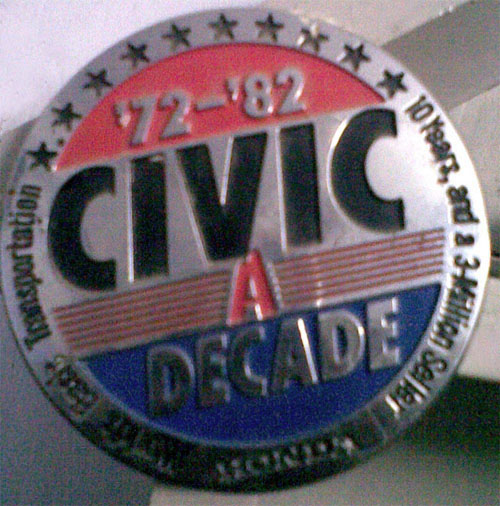 In 1982, Honda celebrated a decade of Civics’ success (1972-82). The image attached of a souvenir shows ten stars on top of it, representing ten years of Honda Civic. The text on the left reads “World’s Best Transportation” while the text on the right says “10 years, and a 3-Million Seller.” Having Honda logo at the bottom, the souvenir was received by those buyers who purchased their Civic in the year 1982.

The Civic became immensely popular when in 1984 the 3rd generation Civic with 1.3-liter engine arrived in our market. The Civic grew not just in size, but also in terms of design sophistication. The wheelbase of 3rd gen Civic was now 96.5 inches which was 5 inches more than the earlier models. The exterior was neat and classy devoid of any gimmickry while a spacious interior design with supportive seats, large gauges, high-quality fit and finish, and an array of interior color options made the 1984 Civic cars attractive and an immediate success. In 1986, the 3rd gen Civic received a facelift, with different rear combination lamps and power-pack trims become available.

Just four years later in 1988, the 4th generation Civic appeared in Pakistan with an even sleeker design, lower hood line, increased glass area and lower wind drag. 4th gen Civics boasts a double-wishbone suspension system that was used for all four wheels. Inspired by Formula One race cars, the Civic design promoted nimble handling and a pleasant ride by precisely controlling wheel travel and retaining the tire’s contact bit square to the road surface. During 1990, the facelift with revised tail lights, extended bumpers, and trims equipped with sunroof appeared in our market.

By 1992, the 5th generation Honda Civic was available in Pakistan with a 1300cc engine. Along with acquiring a more aerodynamic wedge-shaped body, the Civic was expanded in dimensions with a wheelbase of 103.2 inches. And that saw the end of imported Honda Civics in our country and local production was to commence. Honda Atlas Cars Pakistan Limited, a joint venture between Honda Motor Company Limited Japan, and the Atlas Group of Companies, Pakistan was incorporated in November 1992, and their first vehicle, the 5th gen Civic with a 1500cc carburetor engine rolled off the assembly line in May 1994. However, there was no 1300cc engine in the locally assembled Civic. The 5th gen Civic was undoubtedly one of the most loved shapes of Honda Civic in our country not just because of the visual aesthetics, but the tremendous room for modifications it offered.

Back then when the ‘Big 3’ of our market began assembling vehicles, the competition was wiped off straight away, as the imports were halted already to get the local industry on its feet. Unlike the 80s when there were a variety of vehicles from a particular segment, available for a buyer to choose from. The market now offered 1000cc or below vehicles offered by Pak Suzuki only; Suzuki provided the only subcompact sedan, the 1300cc compact cars were produced by Toyota while Honda opted for the 1500cc category for the Civic.

From 1995 to 2006, Honda had a strong, unshakeable hold on the 1500cc-1600cc segment in Pakistan. The 6th generation Civic which appeared in 1996 was available in 1.5 liters EXi and 1.6 liter Vti trims. The 7th generation Civic which was launched in 2001 was again available in 1.5 Exi and 1.6 Vti trims. Toyota had a limited number of 1.6 Gli in the 7th gen E100 Corolla lineup, but it was never able to topple the Civic sales. Similarly, the 9th gen Corolla offered a 1.6 SE Saloon variant to counter the Civic but was never able to shake Honda in 1.5/1.6 segment.

In 2006 when the 8th gen Civic was launched in Pakistan, Honda moved the Civic to 1.8-liter category while introducing the 1.5 liter City Steermatic to keep a hold over the 1500cc segment that was already dominated by Honda. By that time Toyota had already discontinued the SE Saloon and replaced it with the 1.8-liter Altis in 2005. It seemed a better decision initially as Honda might have wanted the Civic, which was now even bigger than ever with a 1.8-liter engine to compete with the Toyota Corolla Altis 1.8 while the City Steermatic 1.5 was meant to compete with the only option left in the segment, the Liana Eminent 1.6.

The decision backfired as the 1.5-liter Steermatic was unable to make its place in the market. Honda ran special promotions and even offered zero own, instant delivery, free registration and free 500 liters fuel with the purchase of the City Steermatic, but all in vain. For about seven years there was no offering in the 1500cc segment by Honda. Now the 1.5-liter engine has again been offered in the City Aspire variants of the 5th gen Honda City.

If we observe the Honda sales statistics, they might be producing more vehicles than they did in the past due to an increased production capacity but in terms of market-share, they are constantly on a decline. Today, Honda doesn’t even disclose individual sales figures of City and Civic, instead, present them as a combined figure.

Unlike the Civics of the past which were cheaper and affordable yet easy on the pocket, the Civics of today are expensive and out of the reach of many. The cheapest Civic VTi 1.8 i-VTEC is above 2.0 million and thus caters to a very limited set of buyers with strong purchase power. Local Honda Civics had a very decent reputation in the 1500cc segment. It would have been good for Honda if they had launched the 8th gen Civic in two engine options since there was an R16A engine available for the same Civic in international markets.

The 8th gen Civic (2006-12) and 9th gen Honda Civic (2012-present) are the only locally assembled Civics to be available with a single engine option. However, the 10th gen Civic which is expected to arrive by the start of next year is available with a range of engines including a 2.0 liter K20C2, 1.8 liter R18Z1 and a 1.5 liter L15B7 turbocharged unit can change the game for Honda. In Thailand, the 10th gen Civic comes with a 1.8-liter i-VTEC four-cylinder engine that develops 141 hp and 174 Nm and the 1.5-liter VTEC Turbo engine that produces 173 hp and 220 Nm. Both engines are mated to a continuously variable transmission (CVT) while there is no Prosmatec transmission this time. In the fourth quarter this year, the Civic lineup will be expanded with a 1.0-liter four-cylinder turbo engine with 129hp and 200nm.

Like previous generations, Honda Atlas should offer multiple engine options for the Civic, which will definitely improve the sales of the vehicle catering to a wider range of consumers. Instead of offering a single engine, Honda should try to keep the displacement small and offer us a Civic that’s available in a range of engine options and comes within the reach of the masses. A turbocharged engine would be a very first by any local assembler, Honda’s key to success would be to offer proper after sales and technical support for the 10th gen Civic in our market.

Auto enthusiasts of our country have high hopes from Honda Atlas this time. And the Civic X might act as a game changer for them. Honda needs to play their cards right and offer us a Civic that’s comparable to the rest of the markets. Perhaps by 2017, Honda will be able to post individual sales figures again, for the Civic in Pakistan.