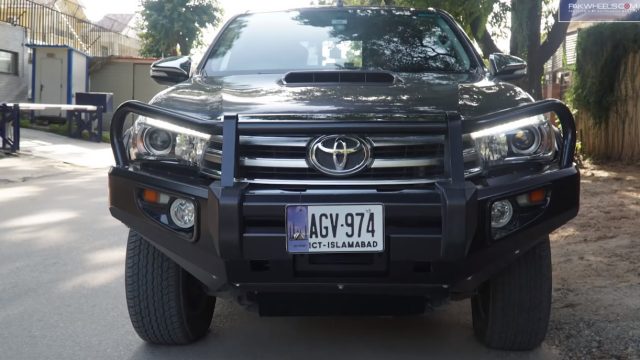 Toyota Hilux has a rich heritage across the globe as a capable and reliable pickup truck. The Hilux under review is the 2017 model Revo V variant. The owner bought it new from the dealership in PKR 4,400,000. The owner was looking for a capable SUV like Range Rover and Toyota Prado. She also looked at the older variants of the above-mentioned SUVs. In the end, the owner decided to buy Toyota Hilux Revo since it was a new vehicle and has the added benefit of dependability and perks like a warranty. At the time of this purchase, there were no competitors in the market like Isuzu D-Max, which came a little later. The owner has driven the car approximately 24000 km over two years.

The exterior design of the Hilux Revo is boxy, which is a standard shape of a pickup truck. However, there are some smooth curves that give it an elegant appearance on the rood. The Hilux under review has many exterior modifications like over-fenders and side moldings. This particular vehicle also has a metal bumper as a modification as the standard one is made up of plastic and is not suitable for proper offroading. Compared to the previous model, the exterior design and look of the Hilux Revo are better. It comes in five different exterior colors: super white, silver metallic, bronze mica, attitude black and graphite. There are LED PES headlamps that give a premium and upmarket look to the Hilux. Daytime Running Lights (DRLs) are also included in the headlamps of the vehicle. The headlamps have automatic leveling that helps in going for an offroading trip. Moreover, follow-me and auto operate functions are also given in the headlamps.

The front grille is made up of chrome and LED fog lamps are integrated into the bumper. Side-turn signals are integrated into the side outer mirrors. The side mirrors are chrome-covered and are power-retractable. Door handles and tailgate handle are also chrome plated. Silver door belt moldings, sidestep, and side visors are also included in the vehicle. There is no deck guard as standard in the vehicle. Other exterior features include sliding rear glass, front and rear mudguards, and front and rear air spats. The front bumper is body-colored and the rear bumper is chrome plated with an integrated step.

Toyota Hilux Revo has a seating capacity of five people. The interior cabin has a lot of features like automatically adjustable seats. The tilt and telescopic steering wheel have audio and other media controls. The 7-inch infotainment system has Bluetooth connectivity, navigation, DVD, voice recognition, USB, HDMI, air gestures, memory card and phone mirroring features. There is digital climate control in the vehicle; however, there are no climate control vents for the rear passengers. According to the owner, the performance of the air conditioning system is normal. It also comes with leather seats. There is a small coolbox in the dashboard that can be used to keep your drinks and other stuff cool. There are many storage spaces in the interior like bottle holders in the doors and cup holders for both front and rear passengers. The cabin color scheme is bronze and the door trim is leather and silver in color.

The instrument panel is finished in chrome and is black and silver in color. Other interior features include power door locks, power windows, push-start, console box with air vent and chrome door handles. Windscreen wipers are time-adjust intermittent and mist activated. Coat and shopping hooks are provided in the vehicle. Illuminated entry system makes it easier to get in and out of the vehicle easily at night. Sun visors are provided for both the passenger and the driver and have integrated mirrors with lids. There are rear three rear headrests and an armrest for the rear passengers. You can also find 12V DC and 220V AC accessory connectors in the vehicle. A total of six speakers are given in the vehicle and a rearview camera is also connected with the infotainment system.

The Toyota Hilux Revo comes with a 1GD-FTV 2.8L engine that produces 130 kW of power at 3400rpm and 420Nm of torque between 1400 to 2600rpm. This is an in-line 4-cylinder engine with a D-4D fuel system. The D-4D is a common-rail diesel fuel system. There is an intercooler for the engine in this vehicle. Toyota Hilux Revo comes in both manual and automatic transmissions. There is a 6-speed manual or 6-speed sequential automatic transmission. The Hilux Revo gives 9 km/l in the city and 10 to 11 km/l on the highway with air conditioning. One oil change can cost you around PKR 6,000 to 7,000 on average. With a better power distribution to the wheels compared to the previous model, the vehicle is more stable.

The Toyota Hilux Revo comes with cruise control that makes driving a bit easier and stress-free. The cruise control is more effective on longer routes like on the motorway. The legroom at the back for rear passengers can be a bit tight for taller adults. The headroom is optimal both at the front and at the back. The vehicle also has a keyless entry system that makes getting in and out a bit easier. The suspension of Hilux Revo is soft over bumps and is ideal for offroading as well.

Safety features include three airbags and all of these are for the front passengers. There are no side airbags or airbags for the rear passengers. Other safety features include vehicle stability control, emergency brake signal, key reminder, light reminder, engine oil leveling warning, shift-lock system, immobilizer, Anti-Lock Braking System (ABS), seatbelts and ISOFIX child seat anchors.

The ground clearance at 286mm makes Hilux Revo an amazing offroader. It also has a rigid frame structure which helps in going offroad. To enhance the off-road capability this vehicle has a differential lock system that helps to improve traction when the vehicle gets stuck in uneven or muddy terrain. The Hilux Revo is also a four-wheel-drive vehicle and you can shift between different modes using a manual switch. There are three modes: H2, H4, and L4. The Hilux Revo also comes with DAC (Downhill Assist Control) which is useful in descending slopes, especially in hilly areas.

The Toyota Hilux Revo is an allrounder vehicle that not only has cutting-edge features but also can be driven both in the city and on rugged terrains for an amazing offroading experience. The spare parts for this vehicle are easily available from 3S dealerships of Toyota and elsewhere. However, the spare parts are expensive for this vehicle. Any accessories that you may require are also easily available from the market. The owner has reservations in using the DAC (Downhill Assist Control) where brakes can become unnecessarily hot. She also wanted more airbags in the vehicle for enhanced safety. The Toyota Hilux Revo has a good resale market in Pakistan. Given another chance, the owner will purchase the same vehicle again. 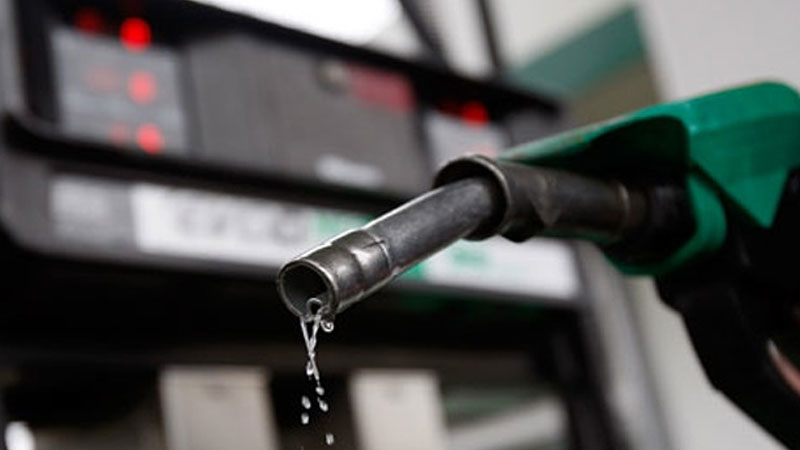