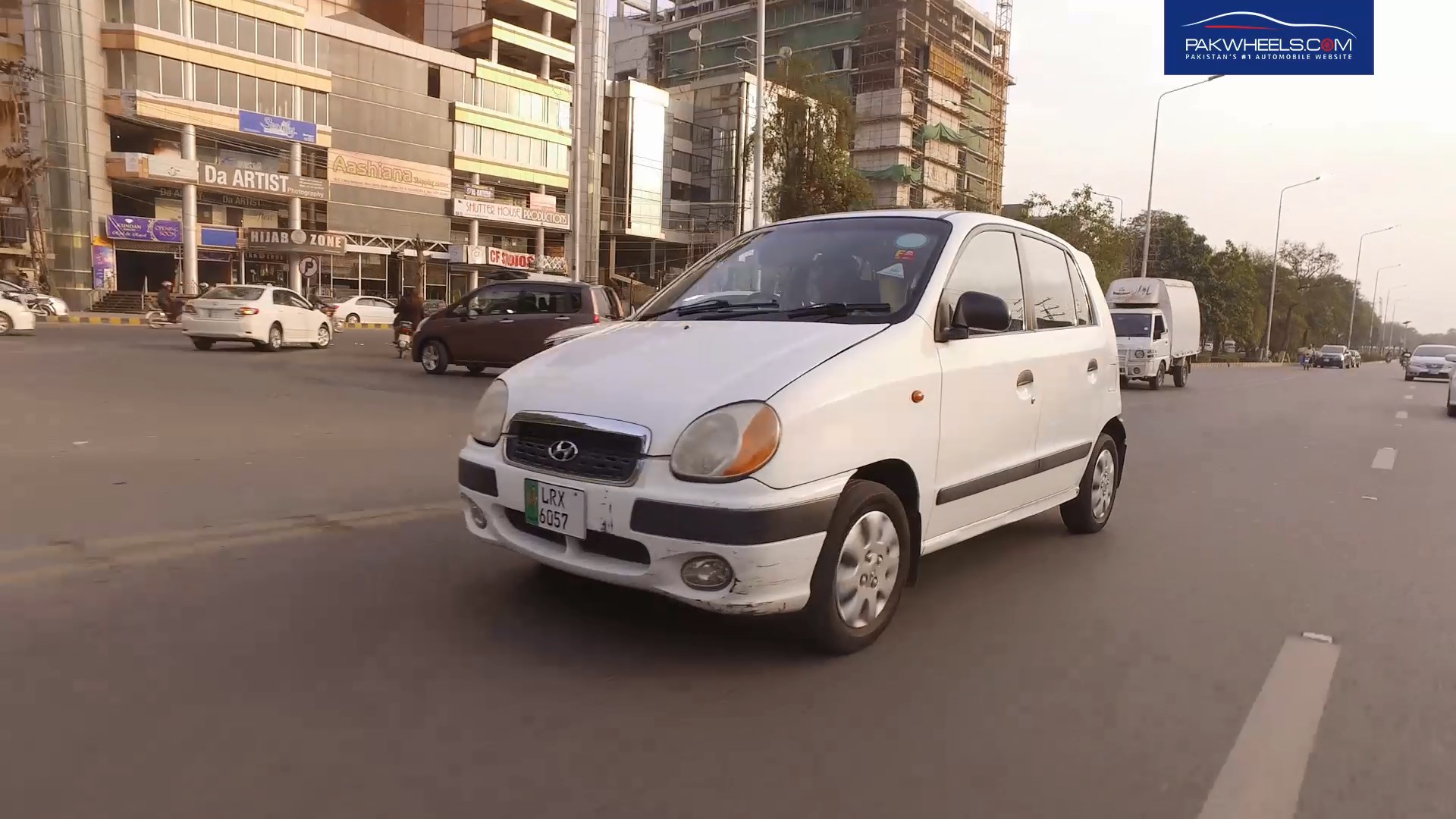 In this particular write-up, we will be discussing 2004 second generation Hyundai Santro Exec variant. Before we start, a little about Hyundai Santro. Santro is a front wheel drive mini hatchback launched by Hyundai back in 2000 in Pakistan. The Santro saw two iterations while it was being sold in the country. The first gen Santro was launched in 2000 and was discontinued after three years in favour of 2nd gen Santro which was launched in 2003. 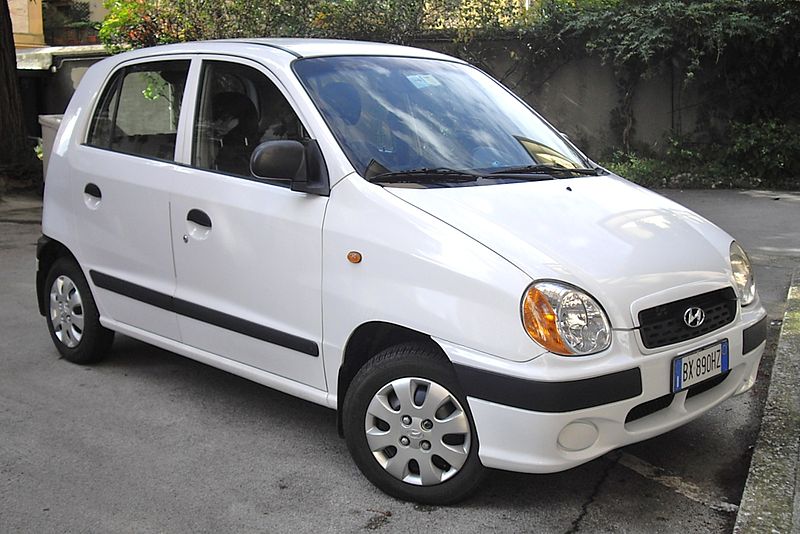 Initially, people thought it is a Korean made so spare parts would be not easy to find; however, that was not the case, and this particular Santro became popular hatchback in 2004-5 among masses. The first gen Santro was only available in one variant (Plus), on the other hand, the second gen Santro came in 6 variants,

There were various small and big difference between the three main variants (Club, Exec, and Prime); from various chrome bits to other frills. But the biggest difference was of the company fitted CNG. GV stands for Green Vehicle and came with the Lovato CNG kit.

Up till 2009, the car was fairly visible on Pakistani roads, but after that due to some reasons its local dealer Dewan Motors became a defaulter, and the Hyundai group exited Pakistan. An interesting tidbit about the car; around 300 units of Santro were released from the bank after a settlement in 2014 and Dewan launched all of them in the market. Despite the fact that Hyundai left the market all the cars were purchased in a limited time by the consumers. The law enforcement agencies also used these Santro cars for patrolling purposes within the city. One can easily assume how popular Santro was in the local market. 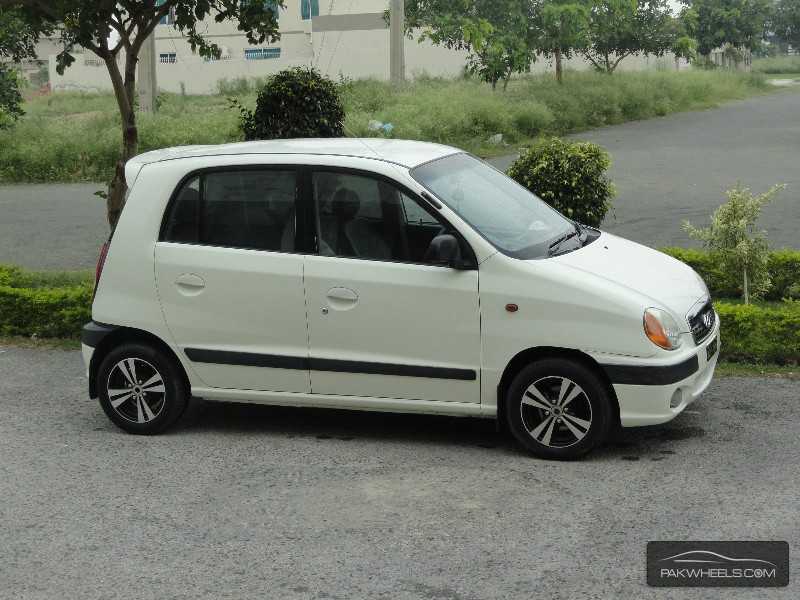 Furthermore, it is to be noted here that Hyundai was the fourth automaker which came to Pakistan after Honda, Suzuki and Toyota. The products of the company created a long-lasting impact on the local automobile industry; both the Santro and the Shehzore took the market by the storm.

Where the first generation Santro was considerably taller and had arguably an awkward exterior, the 2nd gen Santro looks much more conventional yet modern according to its time. People who drove Santro know that the second generation Santro regarding exterior looks is far superior to its first generation. The car is equipped with crystal headlights, fog lamps and a grill which undoubtedly makes it aesthetically decent looking vehicle. It was one of the first cars in Pakistan that came with a rear wiper. Rear wiper was not common even in the imported cars of that era, and it is still absent in some local hatchbacks. 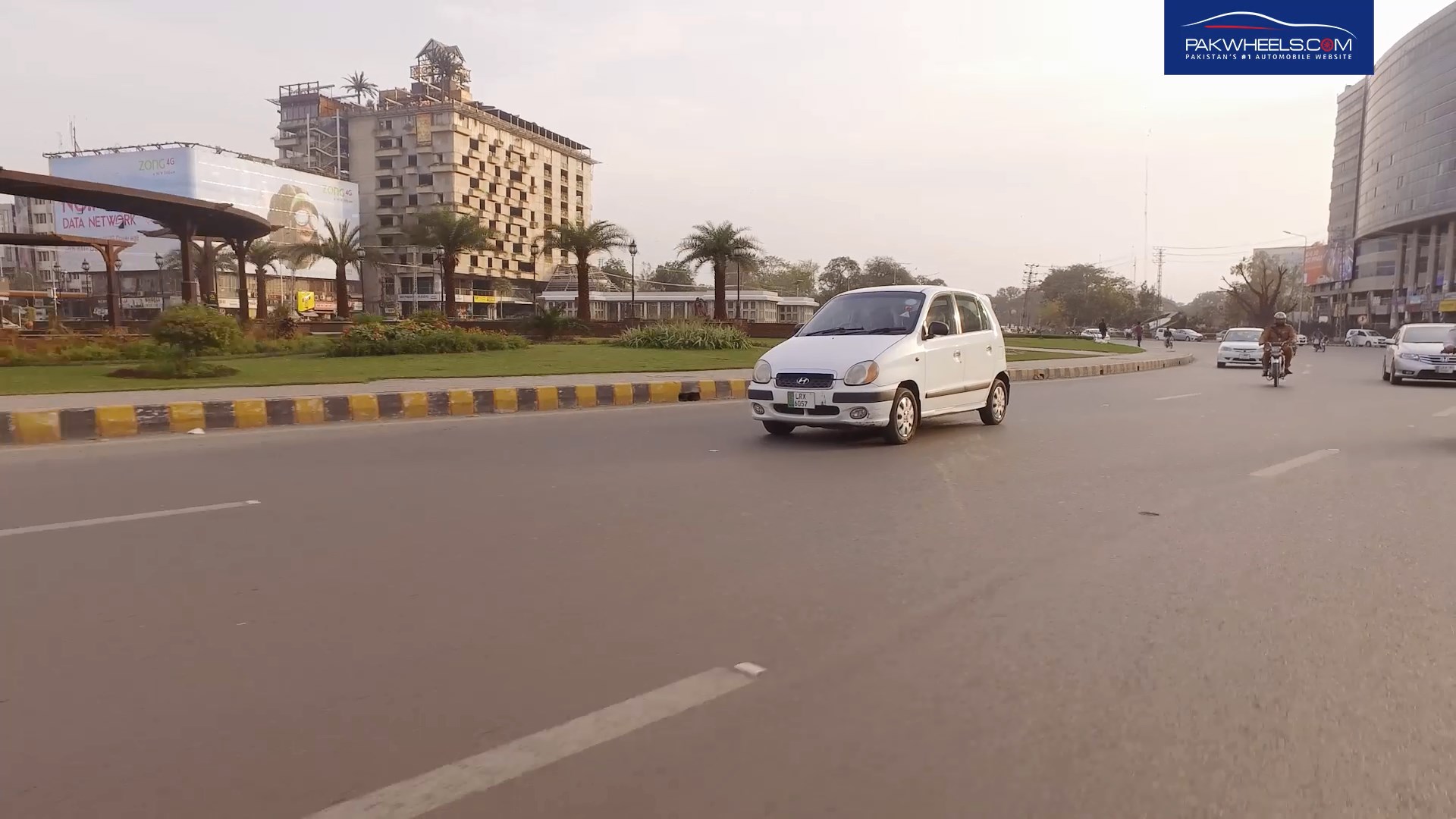 At the rear, the car has a chrome garnish, a spoiler and a twin colour bumper. If we conceptualise the overall exterior design of the car, it was way ahead of its time when it was launched in 2003.

The first thing which one feels when you enter the car is that the interior of the car is very spacious; both the headroom and legroom are considerably good. Two adults and three children can easily sit in the car.

Moreover, according to the best of our knowledge, this was the first car in the country which consisted of white colour information cluster. Back in the day, people used the white colour information meters in their sports cars or modified vehicles. So, it was a great innovation which the company did almost 15 years back. Additionally, one can easily adjust the side mirrors manually from inside of the car, it was another little feature that the car had. 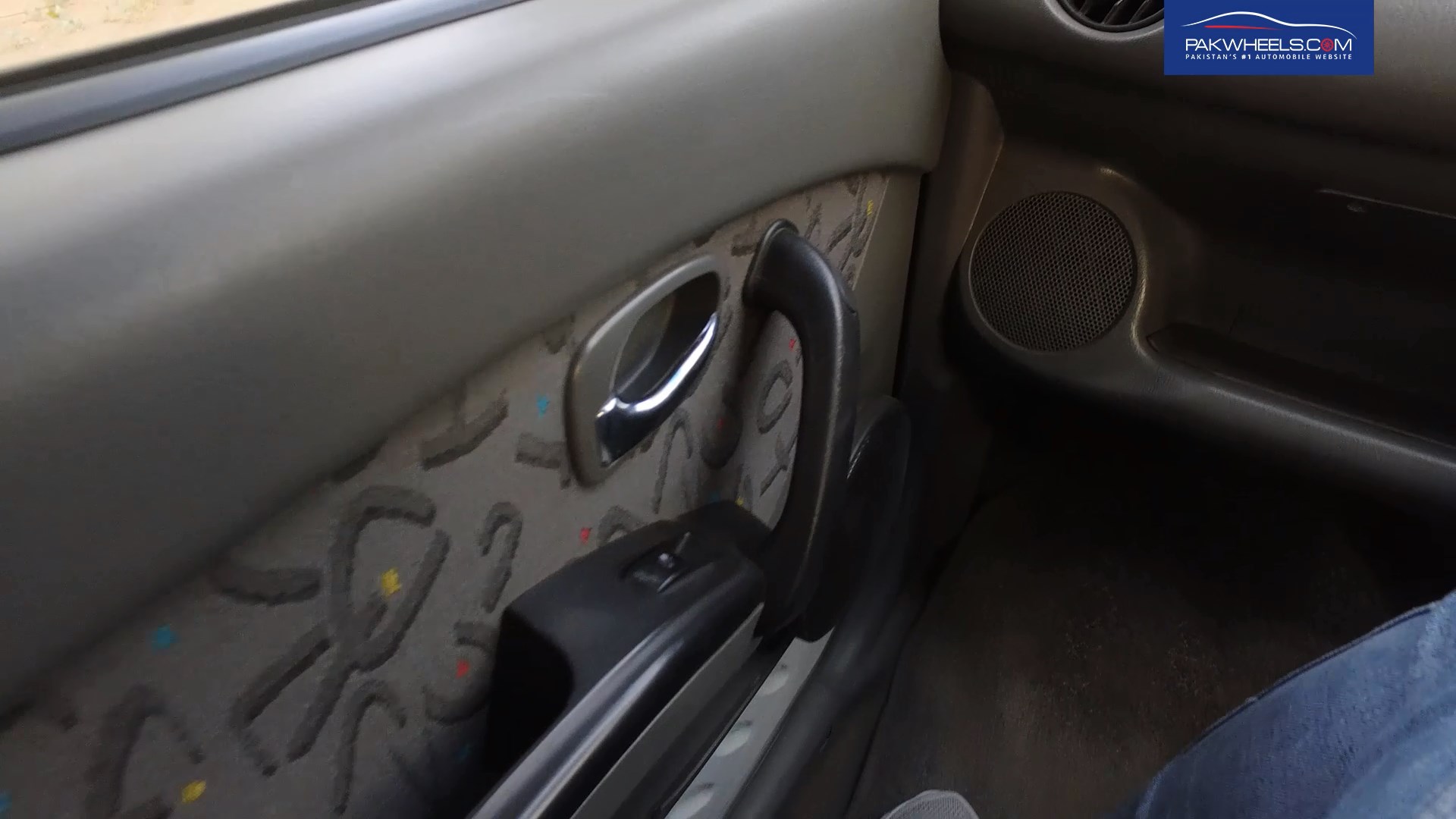 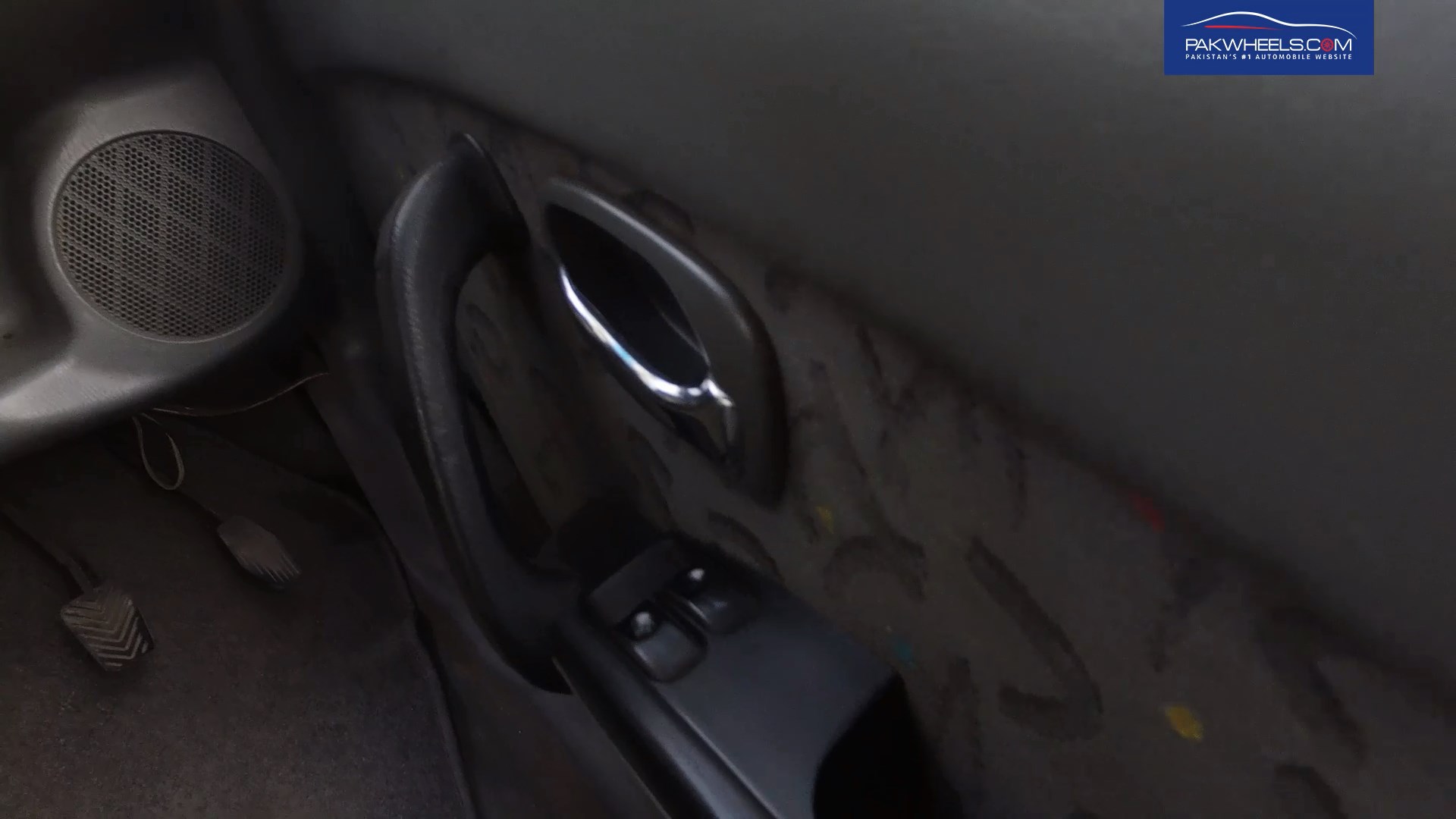 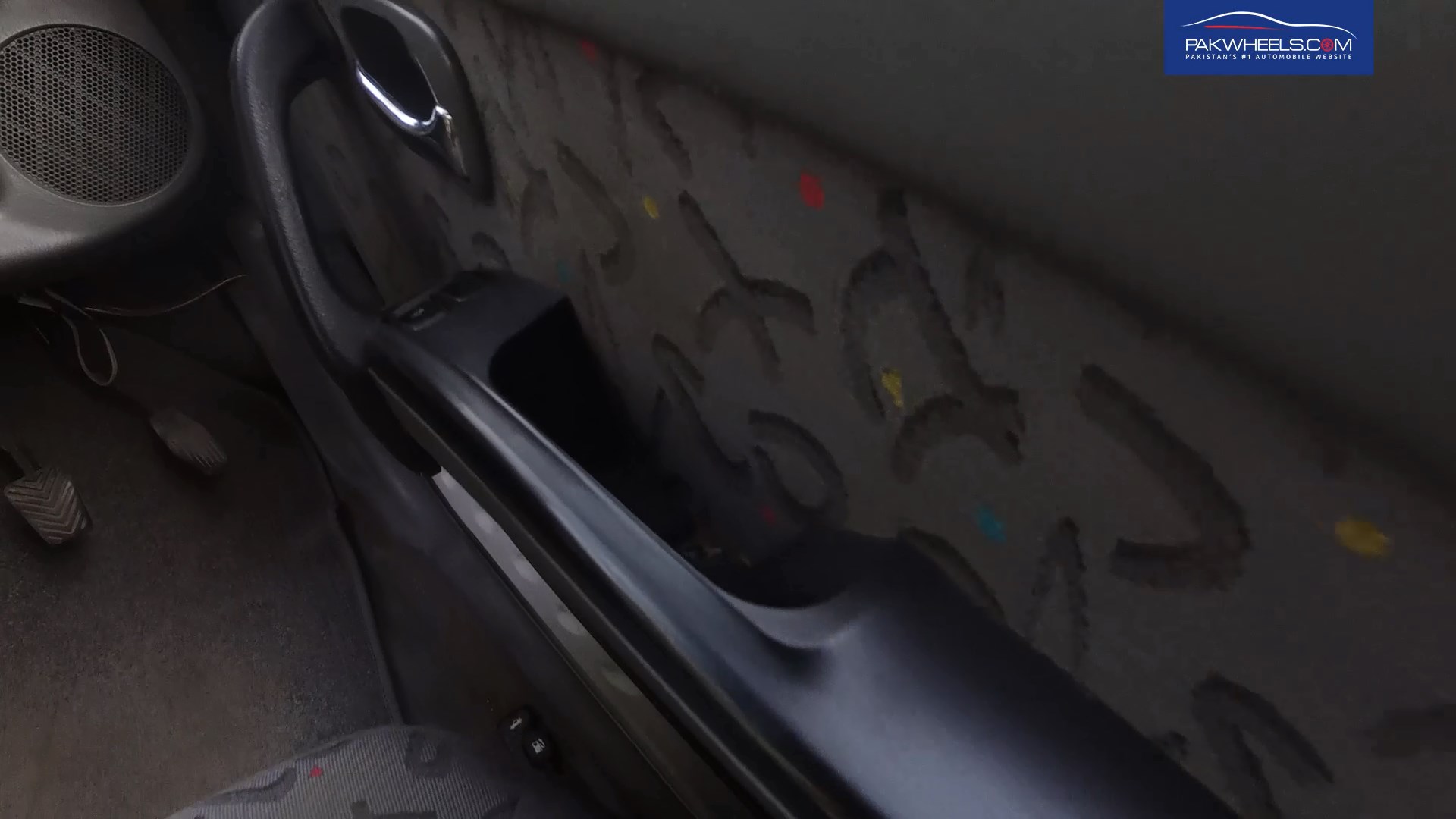 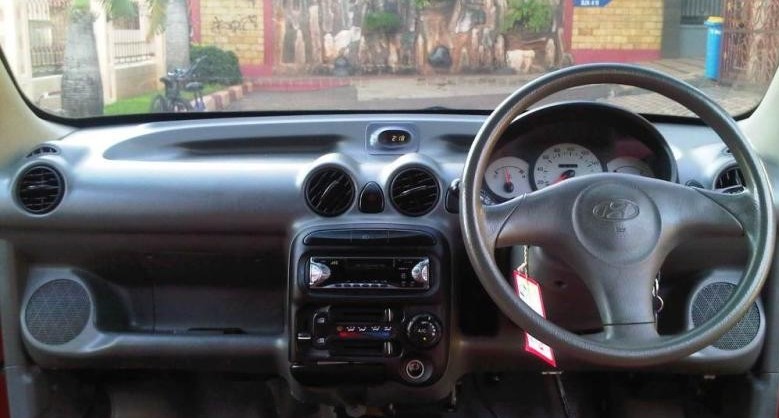 Company fitted audio unit only runs cassettes no USB or other ports were available in it. At that time all the small cars came only with cassette players/radios. However, the car which we drove for reviewing purposes had a CD player in it obviously the stock cassette player was changed with CD player. The dashboard had round and flowy design lines, making it contemporary.

The steering of the car was not telescopic; it was just like which comes in Mehran or other budget cars. The car also came with a defogger. AC vents are also circular with manual AC control switches in the middle part of the dashboard. It is not surprising as it is the budget car and also at the time it was launched even locally produced luxury car didn’t have automatic climate control unit in them. You will also find cup holders in Santro as well. 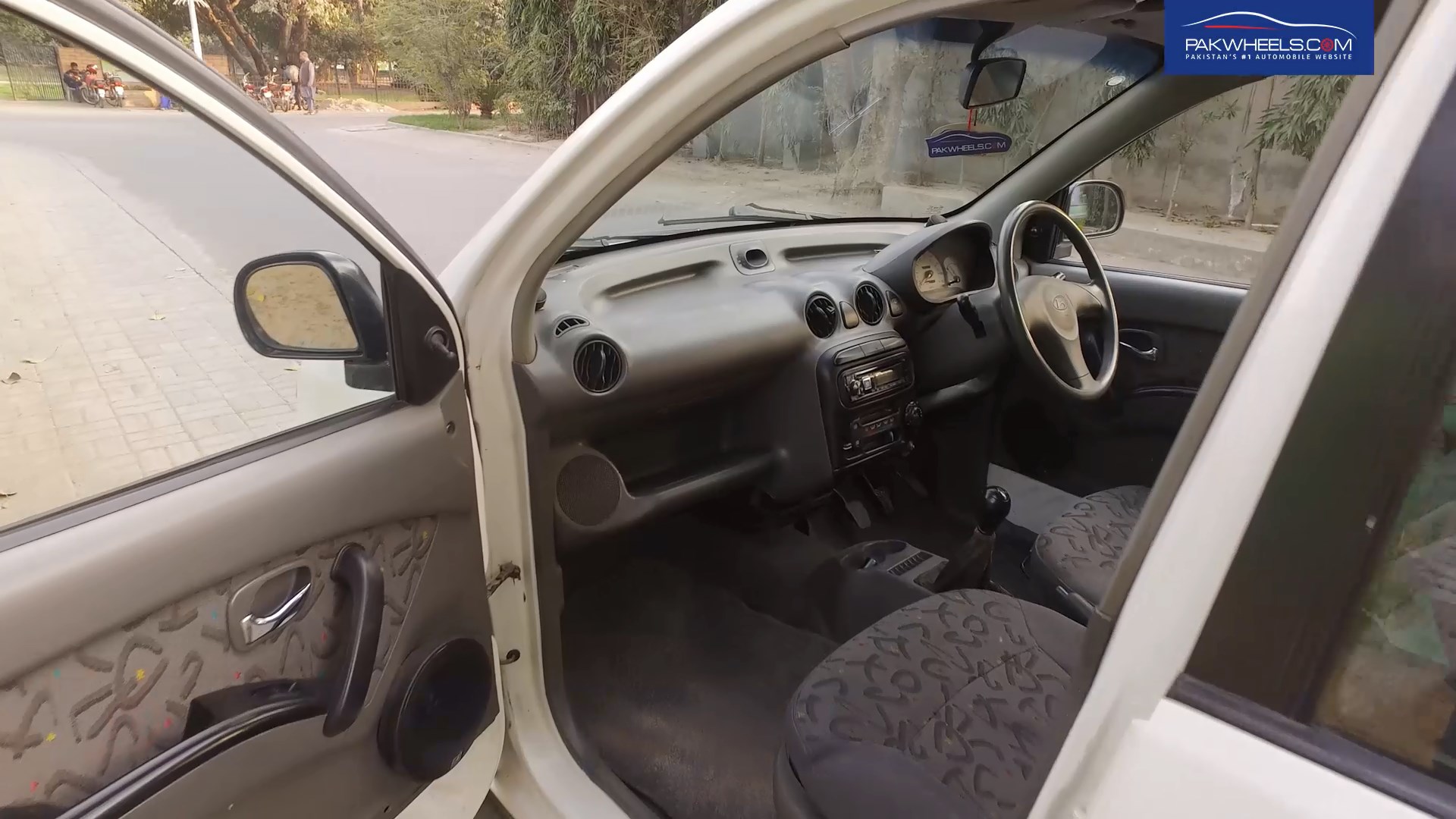 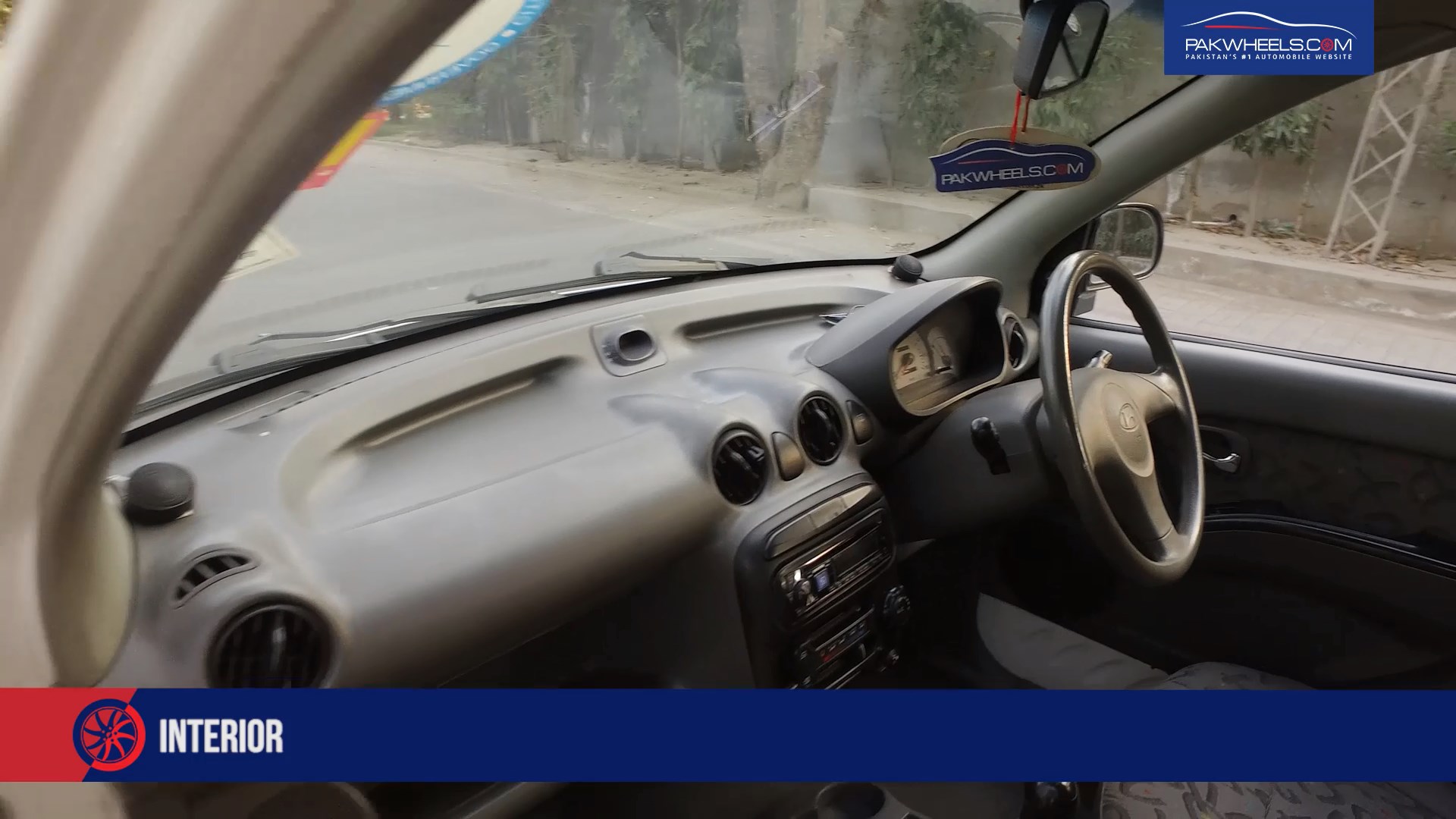 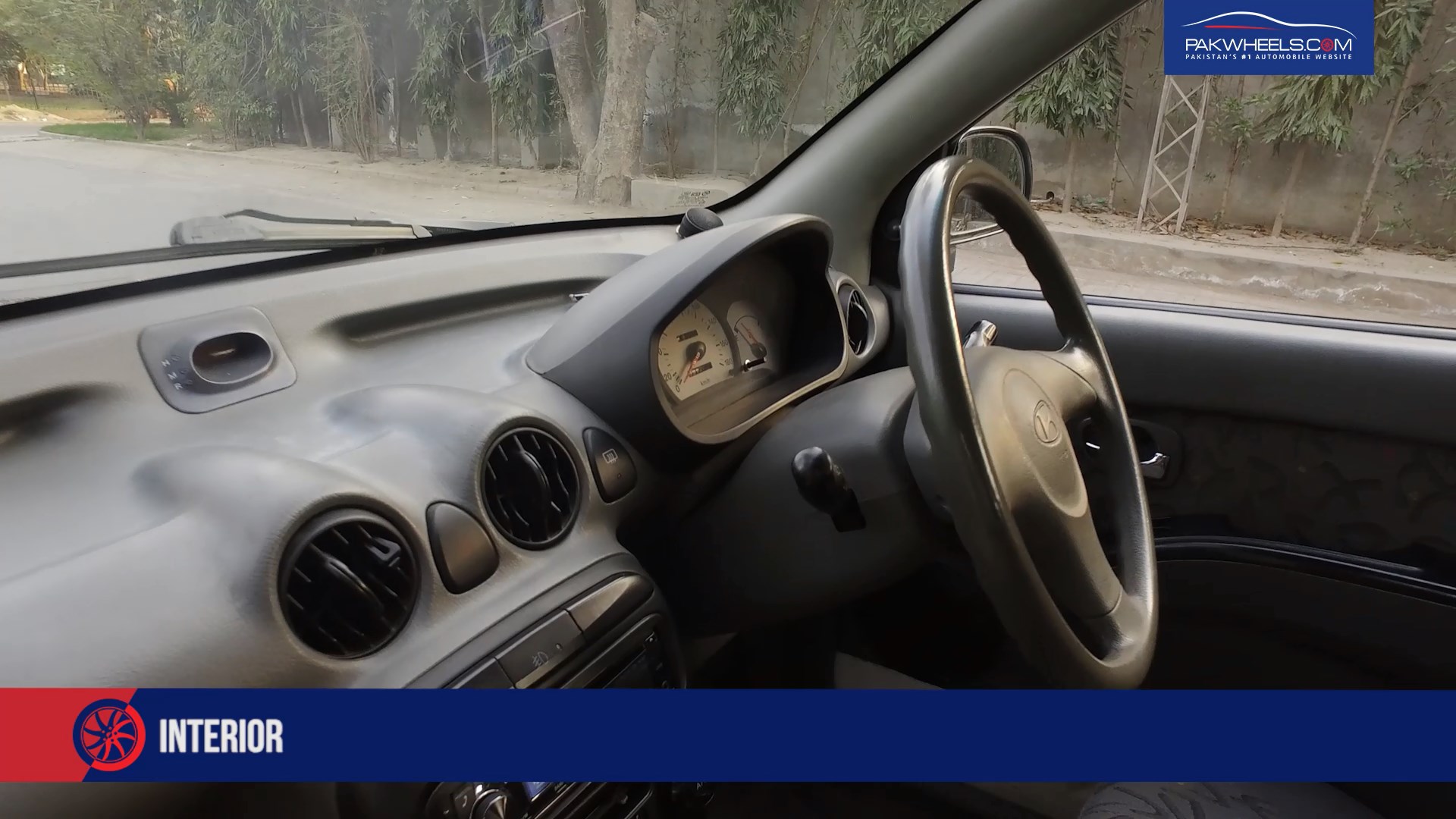 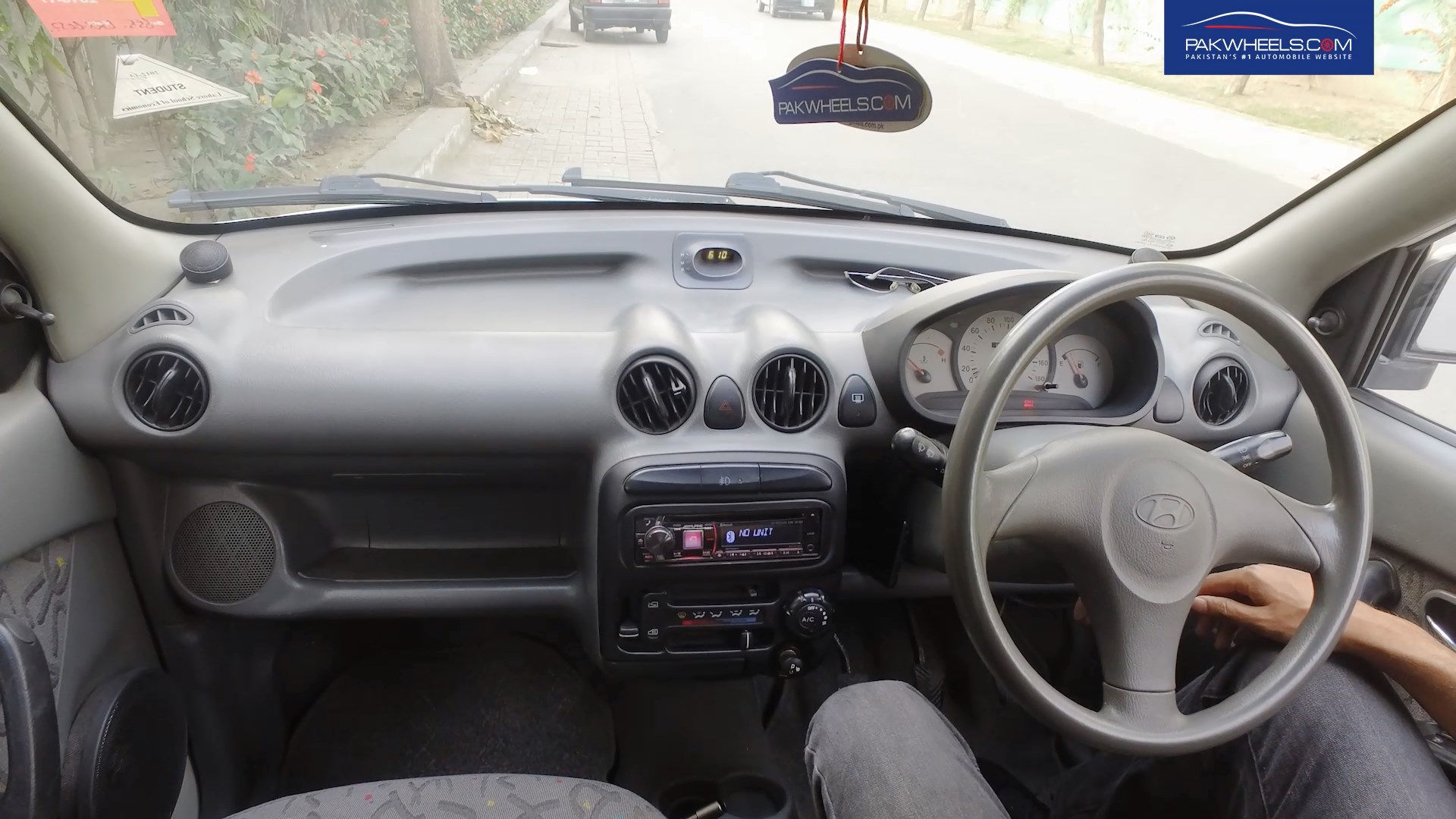 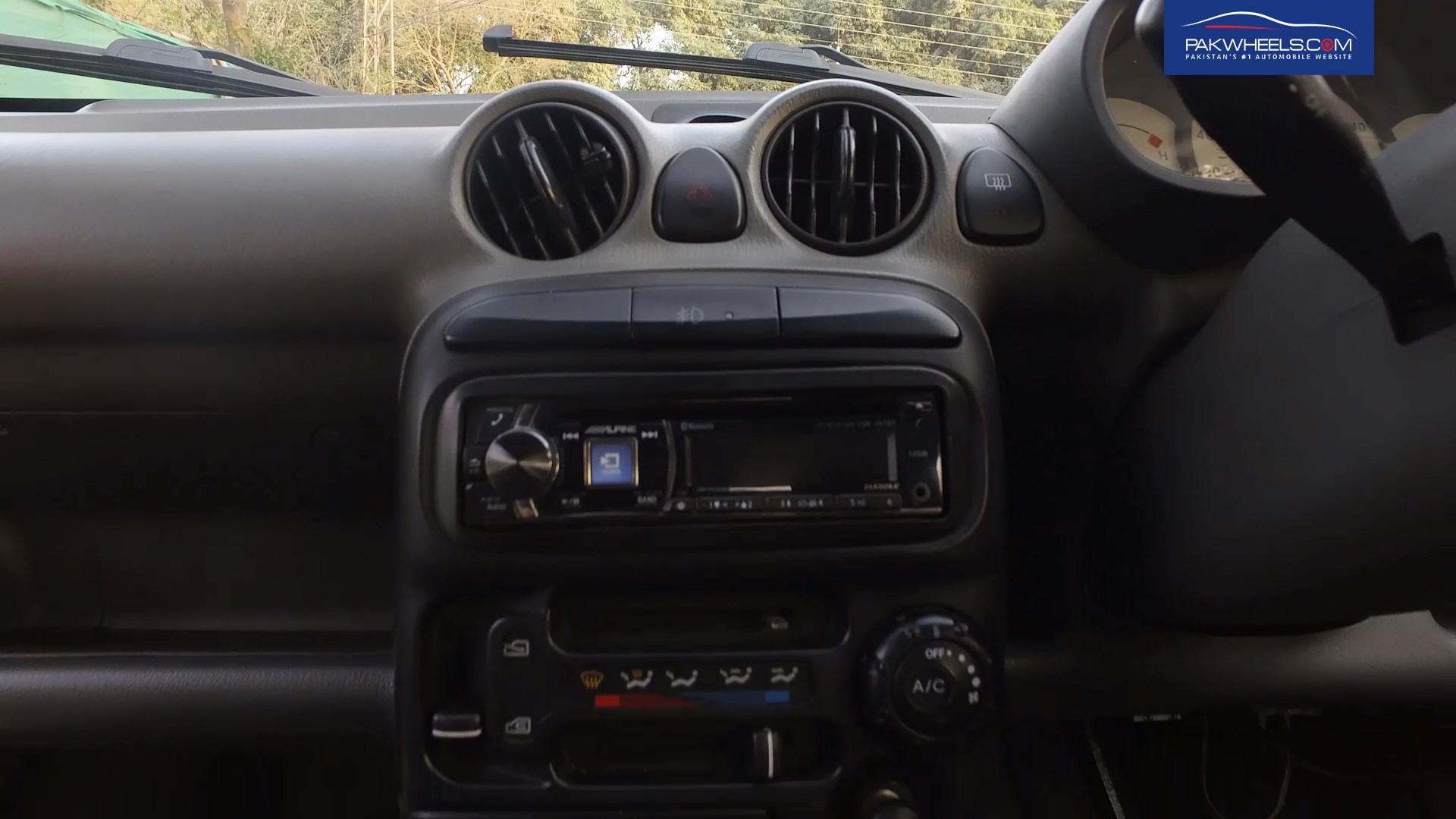 One of the things about the car is that it didn’t come with closed glove box, although it has an ample number of storage compartments. The company even made a storage compartment under the front passenger seat; it was a great novelty from the Hyundai’s side.

As mentioned above the car we reviewed was the Executive model which came with power windows at front and manual at the rear.

Santro came with an in-line 4-cylinder water-cooled engine. The engine was pretty advanced for its time. It had 3-valves per cylinder making it a 12v engine. The 999cc engine in Hyundai Santro was knows as Epsilon engine. The engine, when new, made 55 BHP and 82 Nm of torque. The transmission was a 5-speed manual.

Being a 1.0-liter car with a 5-speed manual gearbox the comfort and ride quality are considerably good. Moreover, the suspension is significantly better as well if compared with other hatchbacks of the time it was introduced. As far as the ground clearance of the car is concerned, it is good considering the Pakistani roads.

The important thing to mention here is that the car from its very first generation was launched with EFI engine it was quite a remarkable thing back in the day because no other car in the same segment came with EFI engine. Suzuki Alto 1000cc was its competitor yet it didn’t feature EFI engine. And this is the reason that the fuel economy of the car was good and it never felt underpowered.

Moving onward, the mileage of the car is decent enough for a car that was launched back in 2003-4. It gives 10-11 km/l per litre in city and 12-14 km/l on highway. It might not be up to the mark by today’s standards, but it is still decent average. Like many mini hatchbacks, the Santro comes with a 35-litre fuel tank.

The AC of the car is still powerful enough even after all these years. It means one doesn’t have to worry in a hot summer day.

Furthermore, the availability of spare parts is no issue at all; one can easily get them from the local auto market. The only problem in the car is that if the ECU of the car becomes nonfunctional, it is difficult to acquire.  However, the good news is that Hyundai has once again come to the country in collaboration with Nishat Motors—meaning you will not have to worry about the spare parts availability in the future. It would not be wrong to assume that Hyundai Nishat will be catering the older Hyundai cars as well.

All in all, considering that it’s a 15-year-old hatchback, the car has amazing features. The space of the car is also good and it also gives good mileage. It’s a complete family car. If you are thinking about buying a used hatchback on a smaller budget, in our opinion, this is the car to go for. The car has been discontinued; nonetheless, one can easily buy used Hyundai Santro ranging from 3 to 6 lacs as per the condition of the car.