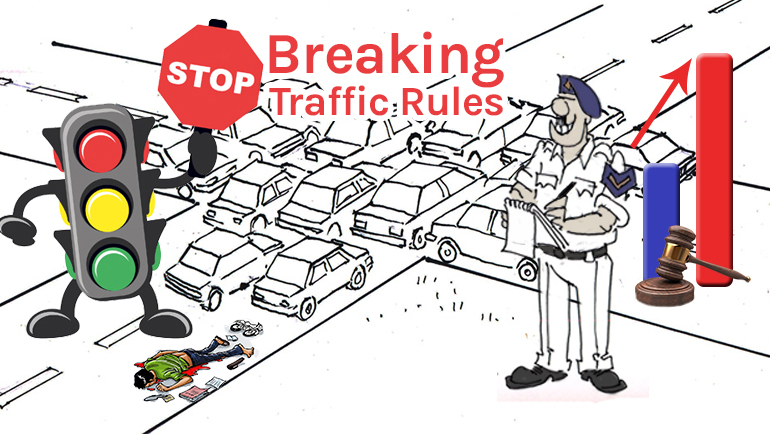 Traffic Rules Violations: Challans Should Be Increased By 400 Percent

Accidents caused by traffic violations have been one of the greatest concerns for developing countries. Unfortunately, Pakistan is ranked at number 3 in terms of number of fatal traffic accidents in South Asia. According to a research, thousands of people get injured or worse, lose their lives in traffic related accidents annually. Number in the list is war riddled Afghanistan, at number two is India who has a huge population when compared to Pakistan. Situation of traffic accidents in Bangladesh is far better than this.

To avoid accidents caused due to over speeding and breaking the signal, following traffic laws is of utmost importance. And to come up with a solution about this, people have been discussing about it on not only at national levels, in National Assembly, but also at local and regional levels as well. Last year, Sindh provincial assembly approved a bill regarding increasing the fines for traffic violations in this regard. But things have not changed. And there are two reason behind them. Firstly, the increment, that was done after 49 years, is very nominal, and secondly, it was not done while keeping the trend of bribery in Police, in minds. Had they increased the fine by 400%, it would have been far more affective.

Right now, the fine for breaking a signal, or having tints on your car, or driving your vehicle in a wrong way on one way road is just Rs 500. If you aren’t wearing helmet when riding your bike, the fine is Rs 300. Over speeding will only cost you Rs 400 in fine. If your car is unregistered, you will be fined Rs 1000, provided you get caught. Violations like these, where yours or someone else’s life is in danger, fines of few hundred rupees make no sense. And if you get caught by a policeman is fine with letting you go if you grease his palms, it will be even cheaper than paying those low fines.

My point is this, the fines will be far more effective if the minimum amount is increased to something like Rs 1000, and you double the fine for repeat violators. I believe this will be a great deterrent. Not only will it teach the lesson to violators, but will also be a warning for the next time.

Believe it or not, before the last year’s implementation of fines, laws of 1965 were still being enforced. In which, minimum fine was Rs 50, and maximum was Rs 300. Rs 300 no doubt was a big amount in 1965 but in current times, it was nothing. Purchasing power of people have increased in past 50 years, but those fines were not true reflection of the times. And people find it easier to pay those policemen in “white” uniforms (which is now “officially” gray) off, than paying the fine. This kind of gives people a permit to violate traffic laws without the fear of consequences. And if amount of fine is increased and some percent of that fine goes to the policeman who caught the violator, it can halt, or at least slow down the menace of bribery.

What I am talking is nothing new, or uncommon. Many countries around the world have same kind of system implemented. From Alberta Canada, to Jamaica in Carrabin’s, same system is implemented to discourage the traffic violators. In Jamaica, you can get fined for as much as whopping 15000 dollars, for not wearing a helmet. Same way, other countries have also very strict traffic laws. In Germany, where you can actually drive as fast as you can, if you over speed in controlled areas, you can get fined for as much as 680 Euro (around Rs 80,000).

Not only will it help improve traffic police and motor vehicle users on the roads, but will also safe guard pedestrians. It is very encouraging that Lahore Traffic Police introducing E-Ticketing and Islamabad Traffic Police is working to develop an advance system to collect challan through mobile phones but I appreciate if it will be done as quick as possible and expand to other cities as well.