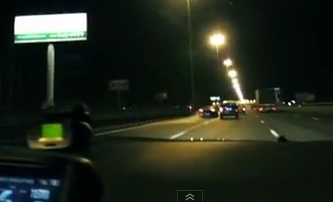 There were two UGR Lamborghini’s against a AMS Alpha 12 Nissan GT-R. While one UGR Lamborghini Gallardo with the flappy-pedal gearbox (e-gear) defeated the GT-R couple of times but it eventually broke down due to constant abuse on its engine but it was a happy ending because at 1:51, the UGR Gallardo nearly misses a car adjoining into the left-most lane where it was doing 300 KM/H plus speed at the moment and than in the later run, it broke down. If the Gallardo was any slower at that time than it would’ve resulted in a terrible, terrible crash.

Than came out the manual UGR Gallardo in an attempt to defeat the GT-R but this couldn’t even keep its nose at the Godzilla’s tails and the illegal street racers call it off for the night after the GT-R put the Lamborghini’s to shame every time either of them raced it.

There’s a reason why the GT-R is nicknamed Godzilla. This video explains that very reason very clearly.

Watch the video, but don’t try it on the roads like these outlaws.