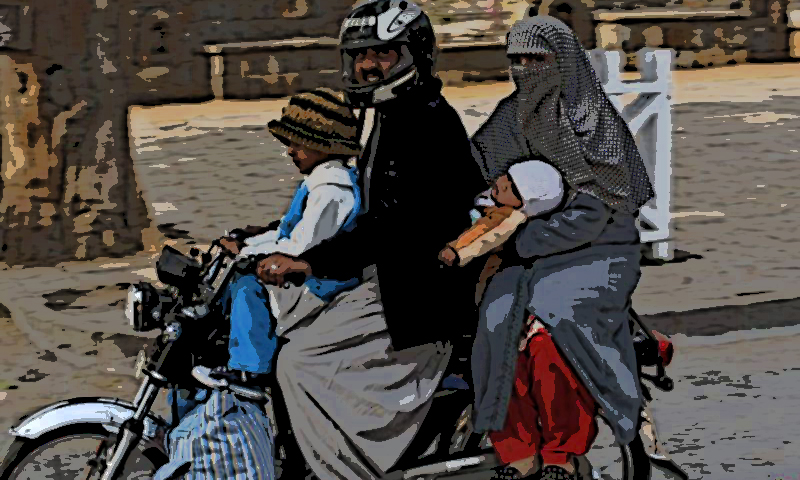 Why Don’t Motorcyclists Use Side-Mirrors And Helmets For Female Pillion Riders?!

Motorcycle sales grew by 22 percent in 2014-15 which gives an avid image of how many motorcyclists have risen in the past few years because of the fact that a motorcycle is an easy way of daily commute and gives you great mileage as well. Mini buses, rickshaws and even car drivers drive like a motorcyclist and try to adopt their ways, a rickshaw driver would try to drive in the narrowest spaces realizing it later that indeed he is driving a rickshaw and not a motorcycle.

As a reasonable mode of transportation, you can buy a motorcycle under Rs. 50,000 if you are going for a 70 cc and motorcycle manufacturers in Pakistan are keen enough to provide side mirrors to their buyers but most bike riders are not interested in getting them fixed on their new F-16 jet which may loose the sheer beauty or class because of not so good design side mirrors.

They forget that it is provided for their own benefit and ease, instead of turning around when taking a turn, they should look into the mirror. It is witnessed by most motorists that the indicators are often not working and you have to judge when the rider turns his head toward either side to determine where he is going to take a sudden turn, which becomes the moment when you apply emergency brakes and rattle abusive words to which the person pays no heed and shoots away like a bullet.

With factory installed exhaust removed from bikes and driving without an exhaust is so common that you will hardly see a motorcycle with a silencer.

Absence of law in Pakistan regarding wearing crash helmets while riding a bike has a serious risk, often teenagers are seen wheeling around on their customized motorbikes and are prone to severe head injuries, it is estimated that 70-80 percent deaths were caused by head injuries.

Most of the motorcyclists ride like that traffic laws do not apply to them, going towards the oncoming traffic to save just a pint of fuel, taking sharp turns, joining the road without looking left or right, and so many more wrong things they do in traffic and have lost or broken precious limbs but they still don’t understand.

On the topic of women pillion riders wearing helmet, most of our women worried for their hair style and make up but it wasn’t funny, not funny for those female who perished. Out of 13 accidents involving women as pillion riders which were reported, all 13 female died.

“There were 13 accidents involving women as pillion riders reported in 2014. Eight of those 13 women died on the spot. The decision was made only for the safety of riders, not to benefit anyone,” the traffic police official said.

So use the helmet and side-mirrors for both the rider and passenger and forgot about your hair but remember your life, safety and the love of your family.