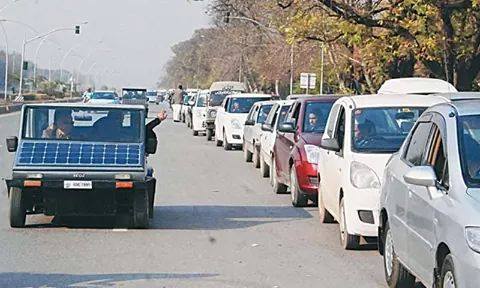 From the past 10 days, the news channels are not reporting anything but stories about the petrol crisis in Pakistan, more specifically in the province of Punjab and how it affected the lives of citizens and the economy at large. Lahore remained the most affected area of this whole crisis, primarily because it is the capital of the province and most of the business and economic activity take place in the city.

There are a lot of people relying on their motorbikes as a means of earning their bread and butter, these include the sales representatives of many pharmaceutical and consumer goods companies, delivery boys of restaurants, and couriers, who were the victim of this petrol shortage and could not work. A large part of their salary is tied up with the number of errands they run and the number of days they work. For almost 10 days and counting they remained out of work because of this fuel shortage.

These are not the only people who were affected by this, the pickup trucks and van drivers, office going salaried individuals and almost every one who requires a motor vehicle remained distress during this time of crisis.

People wouldn’t have thought that there would ever be a fuel shortage or crisis of this level, but when it finally struck them, it made them realize how important mobilization is.

Last night, I was sitting with a couple of petrol-heads at a local tea joint. We were discussing the ongoing petrol crisis when the topic took a turn towards the full-time electric vehicles.

NOTE: Before you start yelling “BHAI MULK MAIN BIJLI NAHI HAI” let me remind you that most of the electric vehicles are designed to be recharged overnight, and all the big cities of Pakistan that I have been to, have constant supply of electricity, so for the sake of discussion, let’s assume we have electricity at night (00:00 to 06:00) throughout the country. Pretty please.

We were wondering whether or not after this crisis people would be more open towards the use of fully electric vehicles such as the Chevrolet Bolt, Nissan Leaf or even the Tesla Model S. These vehicles are doing pretty well globally. Some small scale automakers have taken initiatives to introduce Electric Rickshaw and Electric Bike in Pakistan. Although we haven’t seen them making a progress in terms of sales numbers, neither have we seen those vehicles on roads being used as daily drivers, but we are hoping that after going through the hell of finding fuel in a metropolitan, people would become more open to the idea of owning an all electric vehicle. They may have cons that outweigh their pros, but that’s also subjective. Different people have different needs, and for a certain group of people these electric vehicle may prove to be very practical.

Do you think this petrol crisis will push Pakistanis towards buying all electric vehicles? Let us know in the comments.

All You Need To Know About Development Mules