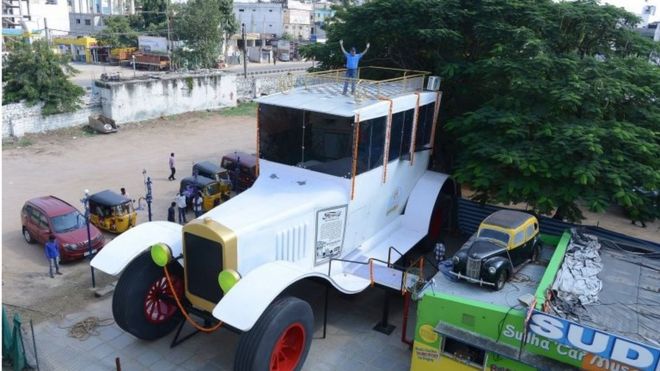 If you’re an avid reader of the annual Guinness World Of Records books then you just might remember a man who goes by the name of Sudhakar Yadav. He’s an Indian car designer who set the record for the world’s tallest tricycle at an amazing 41.5 feet tall all the way back in 2005. A decade later and it seems Mr. Sudhakar is aiming to score a second world record by making the Guinness record of the world’s largest art car. Mr Yadav said

“We are aiming for the Guinness record of the world’s largest art car. It’s a new record and hopefully I will get it”

The car is modeled after an ancient 1922 Ford Tourer. The model is 26 feet (8m) tall which is nearly twice the height of an average double-decker bus and 50 feet long. Apparently the car can produce the noise made by a F1 Car and is made entirely from scraps. Mr Yadav looks to be a keen petrolhead and it seems he likes to blend in a little creativity with his love of cars. He owns a car museum in the southern city of Hyderabad where he displays a number of “whacky” car models that include cars that look like a toilet commode (yes a commode, that’s not a typo) , an aubergine, a billiards table and a lipstick.