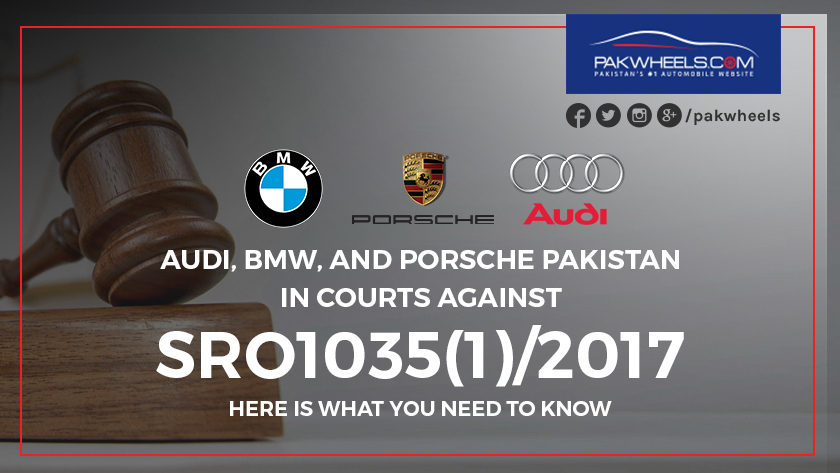 The government of Pakistan issued SRO1035 (1) /2017 on 16, October 2017 and the reason for its issuance according to the government was to stop the devaluation of the rupee. Through this SRO government changed the regulatory import duties on many of the imported products varying from machinery to groceries—a total of 731 products. With the issuance of new SRO, the import duty on imported vehicles also changed, which created a lot of ambiguity and buzz in the local car market.

Many deciphered the SRO differently according to their wishful thinking and knowledge, and we at PakWheels also decoded the SRO. We wrote a full-fledged article on the SRO and explained in detail what this SRO is all about. Some faction of people were maliciously spreading rumors that government has imposed new regulatory import duty on all new and used imported vehicles. However, after going through the SRO carefully, one can see that the regulatory import duty was changed for only new (zero-meter) imported vehicles.

The new SRO has been challenged in the Honourable Courts by Audi, BMW, and Porsche Pakistan. The respective brands import new cars in the country. Audi and BMW Pakistan have argued that SRO 1035(1)/2017 is malafide. Similarly, Porsche argued that the SRO is wholly invalid in both letter and spirit and is also harming and damaging the business.

Porsche Pakistan’s spokesperson told us that this is the first time that the court has accepted a petition. He told us that if they win the case in the court, all the regulatory import duty which they would pay under new SRO shall be reimbursed to them. He further asserted that government is discouraging legal businesses due to illegal and invalid SRO it is issuing. We pay tax, GST and all other taxes and do business through legal channels but still, we get harsh and inappropriate policies from the government, which is not good at all, he added. Porsche Pakistan’s spokesperson also said that this SRO is against the Federation of Pakistan, and it was promised in auto policy 2016-2021 that the import duties will not be increased further.

Porsche has gone one step ahead and filed petition on the grounds that this whole SRO is invalid and argued that,

As mentioned above, according to Porsche’s spokesperson, this is the first time a petition has been accepted by Court, and that petition was filed by Porsche. The respondent shall file a reply in court on 30.11.2017. Moreover, it would be worth mentioning here that according to C.M.No.01/2017 (Any duty to be paid by the petitioner shall be subject to the final outcome of this petition)– in simple terms if Porsche Pakistan win the case regulatory import duty will be reimbursed, if otherwise, then they will not be getting any compensation from the government.  Porsche’s Case No is W.P.No.97255/2017.