Pak-Suzuki managed to set high standards with Suzuki Ciaz’s launch, with its competitive price the car was aimed to serve the purpose of presenting challenge to its competitors. We have seen Pak-Suzuki’s change in its attitude in the past few months, with the launch of Suzuki Vitara, the company aimed to introduce a higher end car and now with Suzuki Ciaz, Pak-Suzuki is aiming to really update its product lineup. The critics however, pointed out that the car won’t see the light of the day because of lack of value for money and modern day amenities such as alloy wheels and parking assist camera. However, the Pakistani public had a totally opposite reaction to this car. How? Just yesterday a PW community member posted that Pak-Suzuki has manged to sell off 760 units of this car in just a few hours after its launch, which is a far fetched figure. 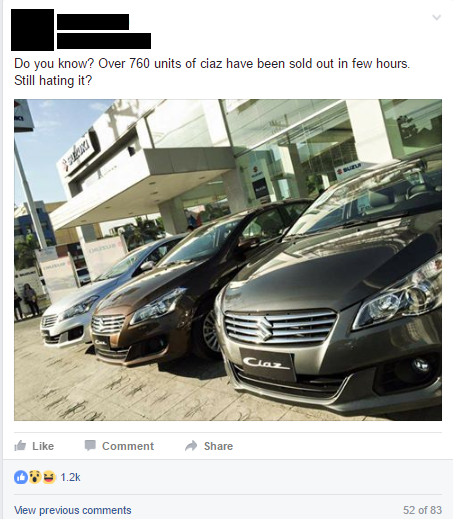 When asked to share some insight into public’s assumption of Pak-Suzuki selling 760 units in a single day, a company official remarked that it feels good to see that people are supporting our strategy and new products, the number -760 units- mentioned is not true. Essentially, we have received a lot of positive feedback and have achieved a tremendous outcome in terms of sales, right after launching Suzuki Ciaz. The fact, however remains that the company will be putting its energies in introducing new products and upholding the extensive after-sales services to provide all solutions to the customers.

Suzuki Ciaz vs Honda City: A Battle of Urban Sedans