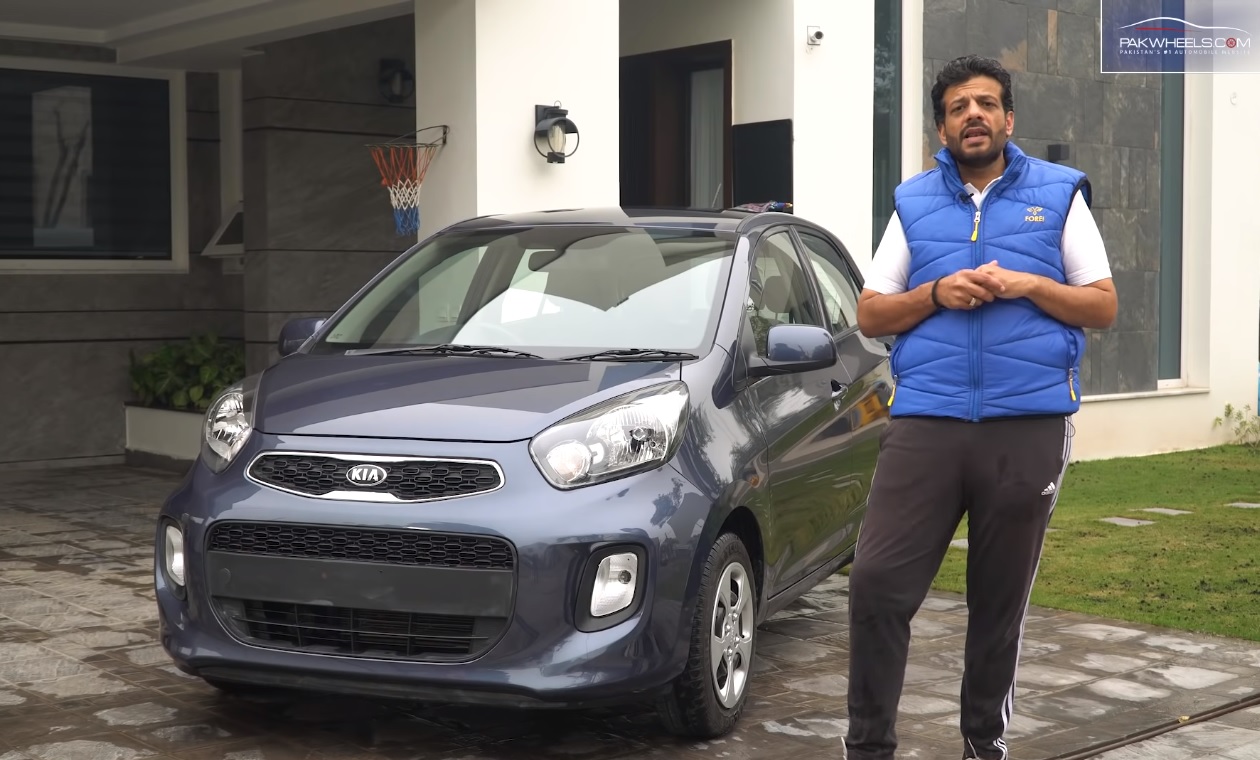 This time around, we have brought a detailed review of Kia Picanto for you guys. Kia showed its presence in Pakistan last year with the introduction of Grand Carnival and Sportage. Users were anticipating the launch of a car in the economic sector from Kia. And now the company has finally launched Picanto in the 1000cc category.

The front of the Picanto has the signature Kia’s tiger-nose grille. The headlights of Picanto are elegant, and the front bumper integrates DRLs. However, the positioning of the DRLs can make them look like they are fog lamps. The company should have opted for fog lamps instead of DRLs, keeping in view today’s age and time. DRLs could have been integrated in a better way in the Picanto. The front of the car boasts a sporty and elegant look. The side profile of Picanto has a conventional hatchback design. The Picanto has 14-inch local Euro Tycoon tires. In the automatic variant, the side mirrors and door handles are body-colored. The car does not come with alloy rims. Alloy rims can be added with an additional cost from the dealership.

The rear end of the car is more elegant than the front end. The rear bumper is a diffuser bumper that integrates the light. The rear windshield has a wiper with a washer nozzle, which does not come in other hatchbacks in Pakistan. The rear end always has the monogram of Kia. The rear windshield also has a defogger with a wiper. The rear lights are also elegant, and there is a roof-mounted antenna at the rear as well. You can also find a spoiler at the rear end of the car. One missing feature is the high-roof brake lamp in this car. The trunk has a trunk separator, toolkit, and a spare wheel. The trunk also has ISOFIX anchors and light to illuminate the trunk. The overall build and paint quality of the car is good.

Since it is a hatchback, the luggage space is small. The trunk can easily fit a big suitcase and a small one. If you want to fit in more stuff, you can remove the trunk separator. There is a 60/40 split in the rear seats, which you can fold for maximum luggage space. The lower portion of the rear seats can also be folded to have a flat surface.

The Picanto has a keyless entry and comes with a jack-knife key. The interior of this car is of good quality, and the driver’s seat has a height adjustment feature that usually comes in luxury cars. The cushioning of the vehicle is very welcoming and comfortable.

This car has an eco function which can be activated from the steering wheel buttons; it’s a little bit tricky in my opinion. The information cluster of the car provides all the essential information such as trip a, trip b, average fuel distance, instant, and overall fuel average. The one thing which I found quite different in the car was that the local cars provide you fuel average in kilometer per liter, but in this car just as European cars, it gives you fuel average in liter per 100kms.

I often complain that new cars don’t come with heat needle. However, this car has a heat needle. Moreover, it also has an rpm meter. The colors of the car’s meter are glowing and a treat for the eyes. It is imperative to mention here that there are no steering controls in the vehicle; instead, the meter reset buttons have been embedded in it.

There is a silver combination trim present in the steering and the dashboard. The grip of the steering wheel is good. Furthermore, the steering wheel has a tilt option as well. The A/C and other controls are at an arm-length and can be assessed easily while driving. The car which we are reviewing has an infotainment system that does not come as standard. You have to pay extra to opt for this option in your car. Other than the infotainment system, the mates of the car and alloy wheels are also optional features.

The infotainment system of the car, which we are reviewing, has Bluetooth connectivity, AUX, and phone mirroring options. Unlike the Chinese infotainment systems, this is a class apart from them. Its voice quality is also good. Overall, the touch of the infotainment system is smooth, and Bluetooth connectivity is also quick. There is no reverse camera in the car which could have been added. There are two 12V charging docks in the car. There are two cupholders in the front and one in the rear, moreover, a USB port is also given in the car. There is no central armrest in the car, but due to the cushioning of the car, you might not feel the need of armrest, but still, it would have been a plus if the company had given it. There is a roof-mounted sunglass holder, light in the glovebox, and ambient lighting at the front. The storage tray is located under the front passenger seat in which you can easily store little yet important belongings. It’s also very easily accessible from the driver’s seat, which makes it a useful feature. Side-view mirrors of Picanto are heated, which prevents the accumulation of fog or mist in the winters.

In one word, if we describe the interior of the car, then it is just amazing. From the dashboard to steering to the build quality, it is just too good. The soundproofing of the car is better compared to cars in this category.

The car has dual airbags, ABS, security alarm, and an immobilizer key as safety features.

The legroom and headroom for the driver are optimal. However, if the person is 6 feet tall, then he/she might get into trouble while entering or exiting the car. The legroom in the rear is a bit on the short side. There are three headrests in the rear of the car. The cushion for the rear seats is also comfortable. Note here that KIA Picanto is equipped with an international safety standard known as ISO Child Fix. It’s not offered in any of the locally produced hatchbacks in Pakistan. ISO Child Fix has attachment points for child safety seats at the rear side of the car. It’s certainly a unique feature offered by the company, which indicates that the automaker prioritizes safety in its cars.

On long journeys, this car can easily seat four adults, and on shorter journeys, five people can sit comfortably. The headroom in the rear is optimal for this hatchback. Seatbelts are present for all five passengers in this car, which is a good safety feature.

As we are reviewing the car in the winter season, we cannot tell how effective the a/c is, but the throw of the a/c system is optimal and is controlled by manual climate control.

The Kia Picanto has a 1000cc 3-cylinder MPI (Multi-Point Injection) engine. This engine produces 69 HP and 94 NM of torque. The car’s acceleration is not that great. However, it is not sluggish either. The major focus in an economy car is on the fuel economy.

See the complete video review of KIA Picanto below:

This is the only car in the 1000cc category that comes with a 100% fully automatic gearbox. The one included in Cultus is AGS technology, which is not fully automatic. The Picanto has a 4-speed automatic transmission.

The fuel economy in the city is 13.5 to15 km/l with a/c and depending upon if you are driving it with a light foot or heavy foot. The fuel economy on the highway is about 13.5 km/l.

The road grip and brakes are great, I must say. I personally tested the brakes of the car while doing the 0-100 test, and it was excellent. Note that the car has not big tires, but still, the car has excellent road grip while turning on high-speed. The ground clearance of Picanto is good, I have driven this car from many speed breakers, and it passed over them with ease.

The interior, exterior, and paint quality of Kia Picanto are perfect and give it a premium look. Kia has introduced two variants of Picanto in Pakistan. One is manual, which is priced at PKR 19 lacs, and the other one is automatic, which is priced at PKR 20 lacs. The warranty terms are also amazing at 4 years or 100,000 km. Price is a subjective matter, and considering the options and features, it shows that Kia did an amazing job in doing market research. In this market research, Kia got to know what the consumer demands, and it precisely provided those features in Picanto.

Some features are from the category of luxury cars that are provided in Picanto. With the introduction of Picanto, the single-player monopoly has ended, and people have more options to choose from in the 1000cc category. Other than the car being somewhat congested, people might have concerns regarding the availability of spare parts, which will be decided in the near future by what market position Kia takes. The after-sales services and the dealer network of Kia will decide the long term fate of Picanto in Pakistan.

Recommended for you: No, Zotye is not an electric car launched in Pakistan?

4 hatchbacks to be launched in Pakistan in 2020