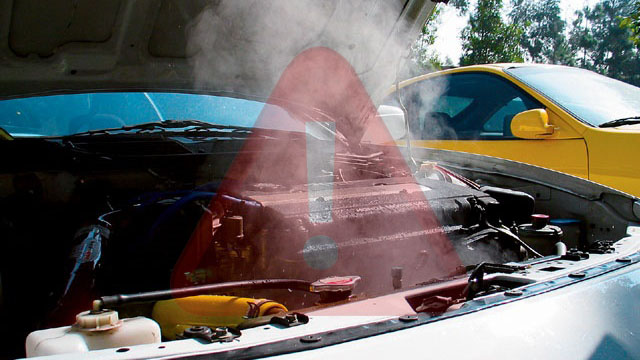 It is that time of the year when it is starting to get hot, at least in the daytime. Also you start seeing cars on the roadside with the bonnets open and the owner/driver with a bottle of water trying to cool down an overheated engine. If they are lucky it may be a minor fault requiring topping up of the radiator coolant level. Otherwise they could end up with engine seizure. Engine seizures generally mean a major repair bill.

On the other hand you can follow a few tips to keep your car cool during summer, to avoid aggravation.

– First tip is to make sure that there are no leaks in the radiator/cooling system. Having to add water every day to the radiator means that you have a leak that needs fixing. One cause could be the radiator cap. Either the rubber seals are broken or it allows the hot water to flow out at lower pressure.
– Second, repair the leak(s) in the radiator and replace leaking hoses. While at the radiator shop, have the radiator serviced.
– Third, add coolant/antifreeze/antiboil in the cooling system to prevent rusting and scale deposits. Scale deposits are the white stuff that blocks your shower head in your bathroom. The same deposits block the flow of coolant in the radiator. Remember the coolant to water ratio should be a minimum of 33% coolant and remaining water, or consult your car manual for the recommend ratio.
– Fourth, if your car has an electric fan, it will rotate at a slower speed if the charging system is not working. Have it fixed as well. If your car has a belt driven fan, the belt tension should be correct. If you hear screeching sounds, it is an indication of a loose belt. Tighten it. Check the fan belt (and other belts as well) for cracks; replace them before they breaks.
– Fifth, if the engine timing is advanced (usually people get it done for CNG use), it will cause overheating. Have the timing adjusted.
– Sixth, improper wheel alignment can also cause overheating, because of the excessive and unnecessary load on the drive train, as well as high fuel consumption and premature failure of the tyres.
– Seventh, check if your brake pads are rubbing against the disc. This will cause an extra load on the engine resulting in overheating of not only the engine, but also braking system.
– Eighth, check if your thermostat is not stuck in the closed position.

If you follow the above checks, you can minimize overheating. Remember cars have a bad habit of breaking down at the wrong time if not repaired in time.

Honda Vezel: A Potential Competitor To Toyota Prius In Pakistan