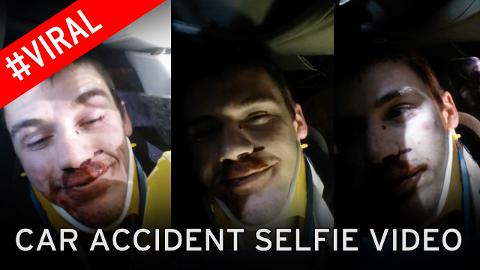 We’ve all been in accidents haven’t we? Nothing too serious of course. But this guy had a major accident and was trapped. Generally it’s a good idea to remain calm and not panic, but this guy thought it was a good idea to take selfie video of himself while he was being cut out of the crashed car.

According to the guy this is what happened before and after:

“I’m okay. On January 11th, 2015 I blacked out behind the wheel at 530 in the morning after a night in Victoria, BC. Drove straight into a pole on the driver’s side at 60 km/h in Duncan, BC. Suffered a broken right arm. Broken left Femur. Broke both knee caps. And both ankles.

Went for major surgery in Victoria which took total 14 hours over a couple days. Metal plates and screws all over. Spent a month in hospital. Only 1 hot nurse 😐 But I’m home now. And recovering quickly!”

This post is a reminder for everyone to please drive safe.

Petrol Price To Increase From March 1