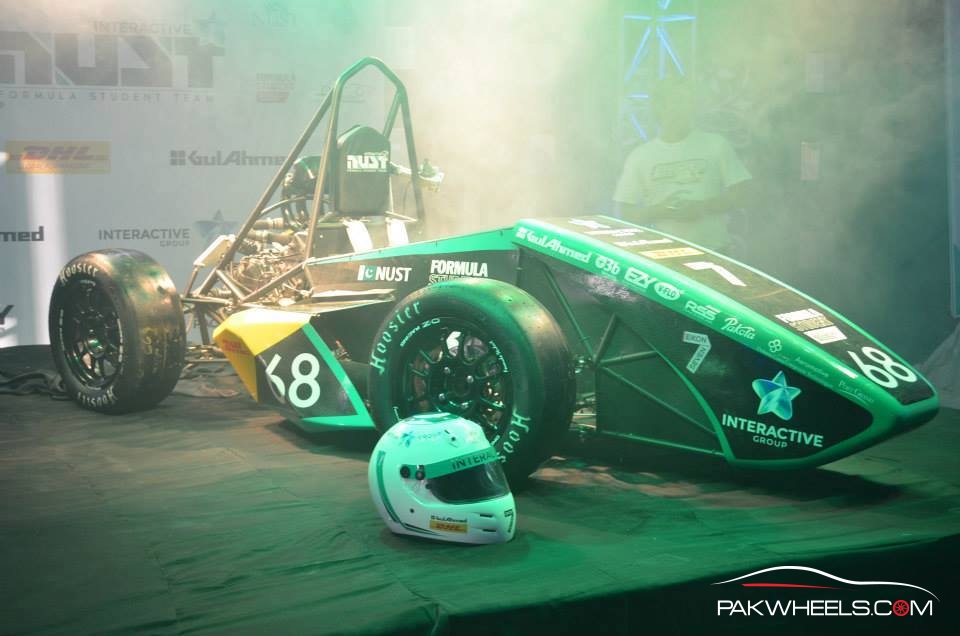 The Formula Student Team from Pakistan Navy Engineering College – a constituent college of NUST, held the unveiling ceremony of NAS15 – its 2015 race car – for the world-renowned Formula Student competitions on the 11th of June, 2015 at Maritime Museum, Karachi.

Since 2012, Interactive NUST Formula Student Team has taken part in Formula Student UK, a motorsports competition organized by the Institute of Mechanical Engineers that challenges students from around the globe to design, build and race a single-seat race car in one year.

This is the fourth time that Interactive NUST Formula Student Team will take part in Formula Student, UK and will go onto participate in Formula Student Germany for the first time this July, with the aim of bringing laurels to the nation. The unveiling ceremony of NAS15 was attended by a large number of motorsports enthusiasts, industrialists, sponsors, alumni, media personnel and general public.

This year’s car is considerably lighter, and can attain an acceleration of 0-100km/hr in under four seconds. NAS15 is completely designed by NUST Formula Student Team, which has worked on each and every aspect of the car, with some major design improvements including a compact chassis, overall better packaging and powertrain reliability.

Last year’s race car, NAS14, which took part in Formula Student UK was also put on display for the audience. On the occasion, ex-marketing manager of Dolmen Mall, Mr. Danesh Dubash presented a memento to the Team Principal of Interactive NUST Formula Student Team and appreciated the efforts of the Team. The overall response of the audience was very encouraging and the Team felt motivated by the interest and support shown, as they prepare to embark on the journey to Formula Student UK and Formula Student Germany this year.

If you want to see the car up close, the NUST Formula Team will be hosting roadshows for the general public to see the car on June 13 and 14 at Port Grand, Karachi and on June 16 at Dolmen Mall Clifton, Karachi.