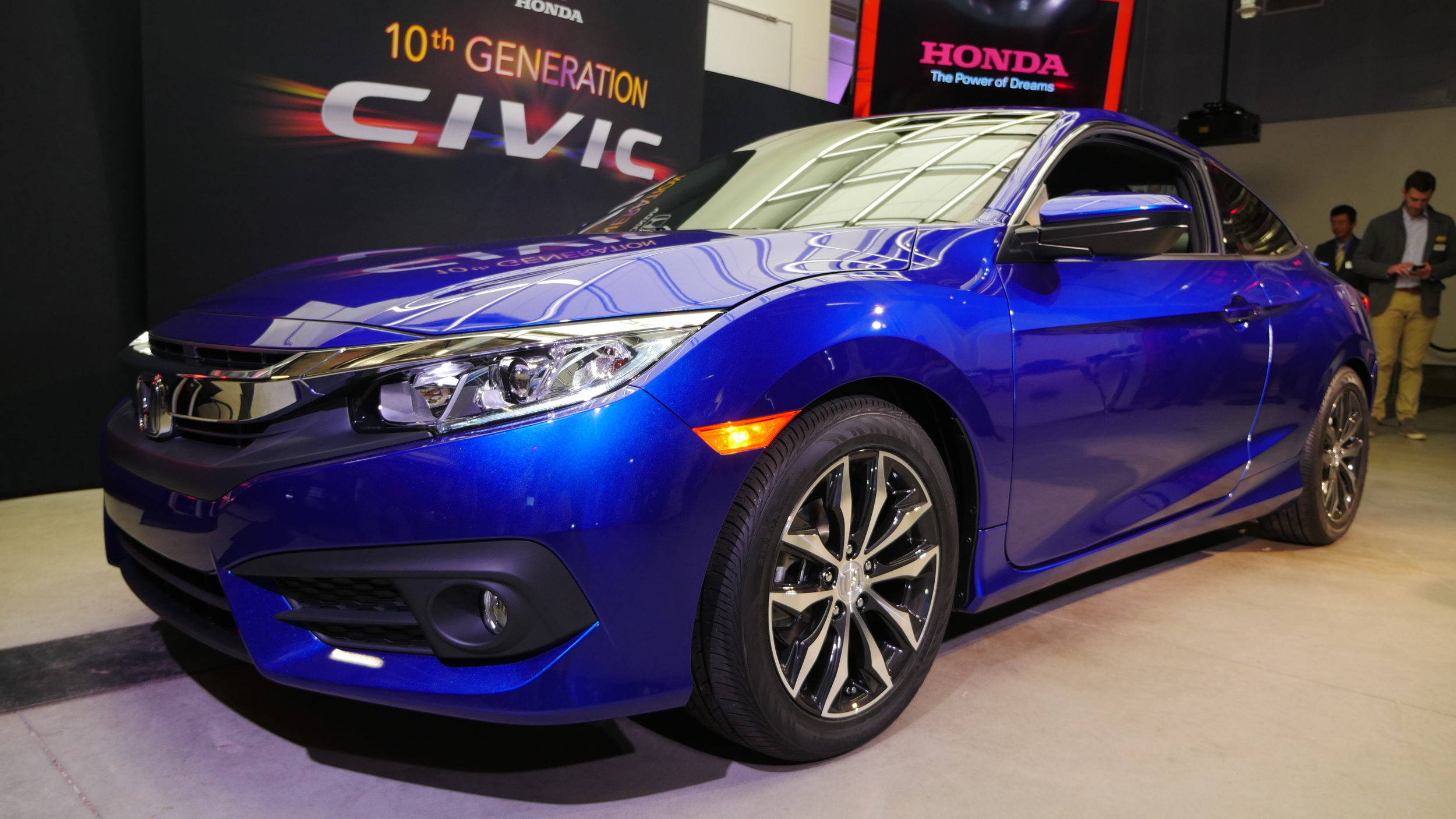 Exactly about two months ago Honda shock the automotive world with the release of their most awaited best-selling sedan, 10th Generation Honda Civic. Today, Honda introduced the two-door coupe version of the Civic model line-up at the Los Angeles Auto Show. The two-door version is offered in the United States only, and about 10% to 15% of Civic buyers opt for the coupe. Honda believes that the new design philosophy with hot sporty character will increase this percentage and will attract many new buyers.

Exterior wise the car looks same as sedan till A pillar but then a sloping roof with rear glass going toward trunk gives a car an athletic look. The rear LED tail lights look same as sedan version but its extended from end to end over trunk below deck spoiler. This is exactly same as what we saw as Concept Civic at NY Auto Show earlier this year. Honda fans loved this design as a concept but is lacking in the sedan version.

As like Civic sedan the Coupe will be offered with two engine options for US market. A 2.0-liter naturally aspirated VTEC 4-cylinder as well as a turbocharged 1.5-liter engine. A CVT transmission will be standard. As per Honda’s press release, Civic Sedans in EX-T, EX-L trims and Touring trims will be powered by a 1.5-liter direct-injected turbocharged 16-valve DOHC inline-4 engine with power output of 173hp, mated with newly designed CVT while LX and EX trims will be powered by a 2.0-liter, 16-valve, DOHC i-VTEC 4-cylinder engine with power output of 158hp; which as per Honda is the most powerful base engine ever offered in a Civic. The 2.0-liter engine will be offered with either a 6-speed manual (LX trim) or continuously variable automatic transmission (CVT).

Interior is well refined for the coupe and exactly same as sedan version. As we mentioned in our previous blogs; the split-level cluster is no more but a new sporty TFT digital cluster will be available. A 7″ touch screen Apple Carplay/Android Auto is introduced with iOS or Play Store compatibility. The 2016 Honda Civic Coupe will have tons of new safety features based on Honda’s Sensing suite of advanced safety and driver-assistive technologies, including Collision Mitigation Braking, Road Departure Mitigation and, for the first time in a Honda, Adaptive Cruise Control with Low-Speed Follow. Overall, Coupe is something very interesting to look at and Honda dream to bring back the Civic roots looks fruitful.

Incentives On The Import Of Hybrid Vehicles Provided By Pakistan Government