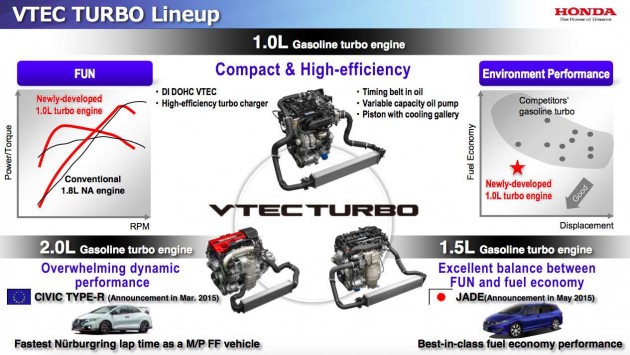 As Honda Civic moves closer to its launch date, more details are being introduced to the public and now, information regarding the engines that will be available with Honda Civic are public now. However, all the engine options are being tested at the moment in Europe for the final release when the time comes.

Honda recently launched its 2016 Civic, also known as Civic X, in Los Angeles a couple of months ago. At that time, Honda still had not made the horsepower numbers public. Auto journalists and different fan websites were claiming the all-new 1.5L turbo charged Honda engine will make around 173 BHP but nothing could be said for sure. Then there was the rumored proposition of a 2.0L N/A (Naturally Aspirated) engine. Honda Europe has now opened up on all the engine options to squash the rumors.

There will be four engine options available in the Civic X:

The smaller all-new 1.0L turbo charged engine is a liquid cooled three cylinder unit. Yes, a three cylinder Honda Civic. But don’t let that put you off. The engine is rated at 127 HP, same as the 7th generation 1.6L Honda Civic launched in Pakistan. The torque of the new engine is rated at 200 Nm. In comparison, the current 2012 Honda Civic available in Pakistan produces 141 HP and 174 Nm. of Torque. So even though you might think that new engine is tiny compared to the current lot, it certainly packs a punch. The engine is being tested with a 6-speed manual transmission. Furthermore, this engine has Variable Valve Timing Control on both cams, and Variable Valve Timing and Lift Electronic Control on intake cam.

The 1.5L turbo charged motor available in US Civic is similar to the one that is being tested for European model. By the looks of it, 1.5L motor is kind of same engine like the 1.0L one, just bigger. But there are few difference when you go in details, like the bigger engine has compression ratio of 10.6 to 1. However, VTEC isn’t kicking in for the 1.5L turbo available in the US Civic but is available in the Euro model. However, the power that the Euro 1.5L is producing is much more than the power produced by the US 1.5L engine. Here’s a comparison of the power the outputs, all taken from officials sources. 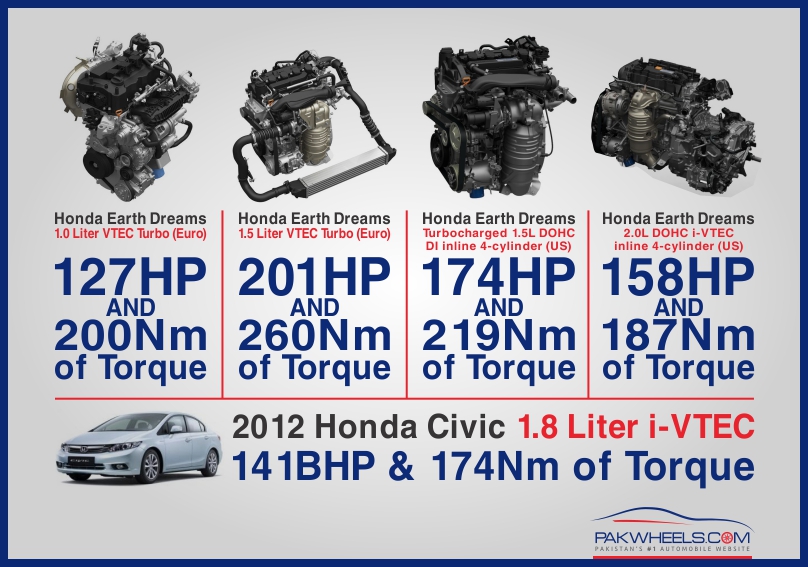 The differences that comes in the power rating may be due to the higher RON rating of fuel in Europe so you can expect that the whichever engine that comes to South East Asia, will come to Pakistan as well, and people estimate the power to be close to what the US 1.5L engine is producing.

European Civic is going to be launched in 2017 and it is being called the 2017 Honda Civic unlike the US market one, where it is called 2016 Honda Civic. There is a chance though that the final engine iteration will produce something completely different than what is being reported now. But the question for us Pakistanis is, are we going to see the 2016 Honda Civic in the year 2016, as many have been speculating, or like Europe, in 2017.

Honda Atlas is tight-lipped on future models and thus, there is no way to confirm from a company source that can be named, but we’ll get some insider information soon. 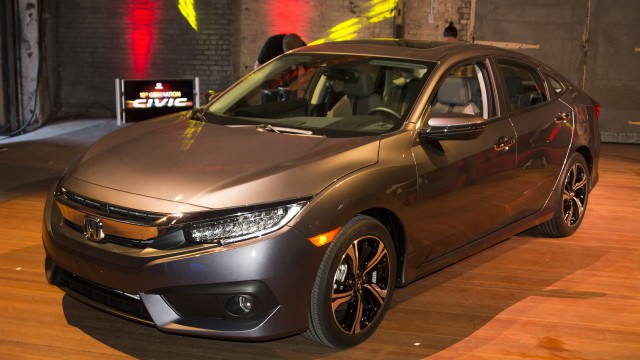 But more importantly, what kind of engine is there going to be. One opinion is that the current 1.8L N/A R18 is going to remain for Pakistani market. Let’s say that doesn’t happen, then what are Honda Atlas’s options of the engines for the new Civic, keeping in mind they have 1.3 and 1.5 available for the Honda City. It will be interesting to see if Honda Atlas will only decide to sell the 1.0L turbo engine, and further reduce the price compared to the current Civic. Or maybe just follow the international trend, and launch the new Civic with the 1.5L turbo engine but slightly de-tuned, and yet be able to make some price decrease due to the duty saving.

1.0L can be the EXI and the 1.5L can be the VTI Oriel or something, this would really make the Civic flexible to compete with the new Toyota Corolla which has beaten the Civic quite bad. Small engines is where everyone is going at, having a 1.0L engine doesn’t mean you’re all of a sudden on the same level as a Mehran, no but you’re efficient now. BMW M cars wrote in stone that they will not use forced induction (Turbo) ever in their cars but they are doing it now, in the name of efficiency, mileage and environment.

The smaller engines warrant a price cut as well, that means bad news for the 2012 (9th gen) Civic owners whose car prices will fall in the used market due to it coming in smaller displacement, but that’s one sour bite we’re willing to take. 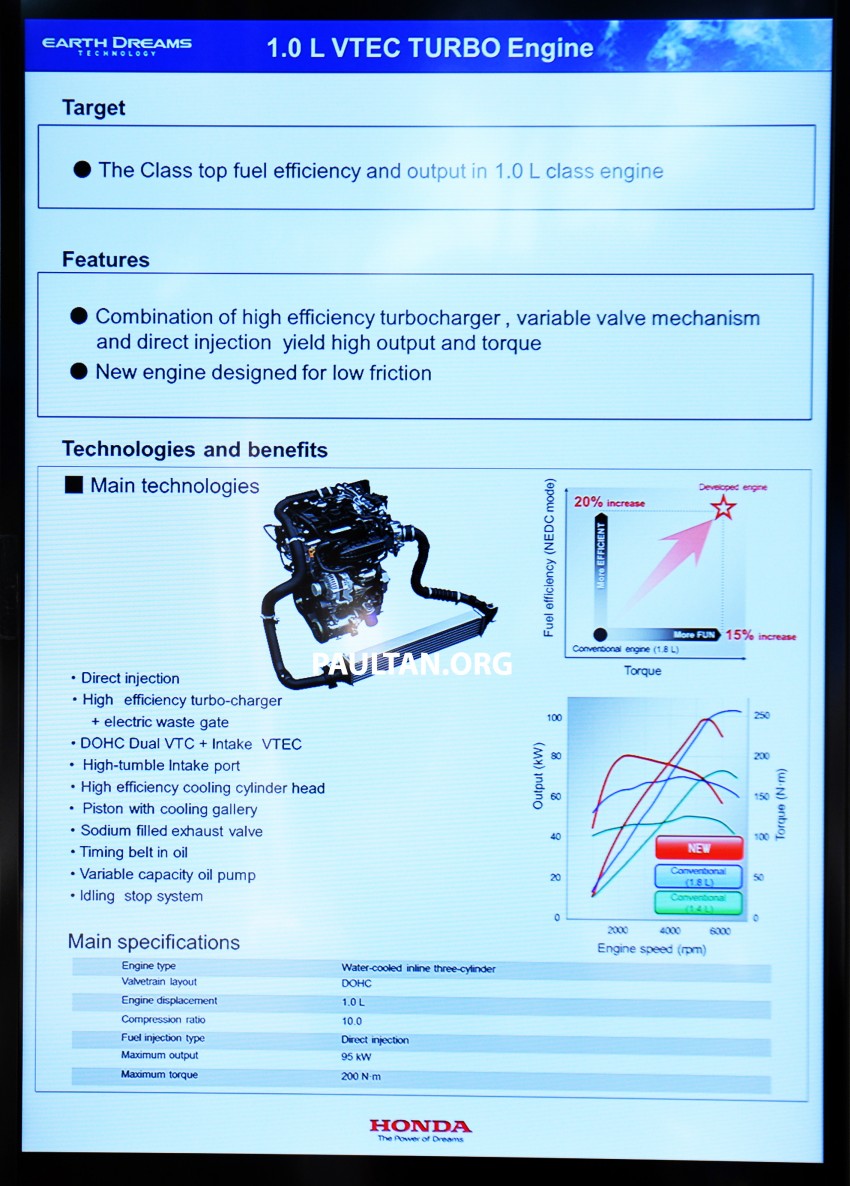 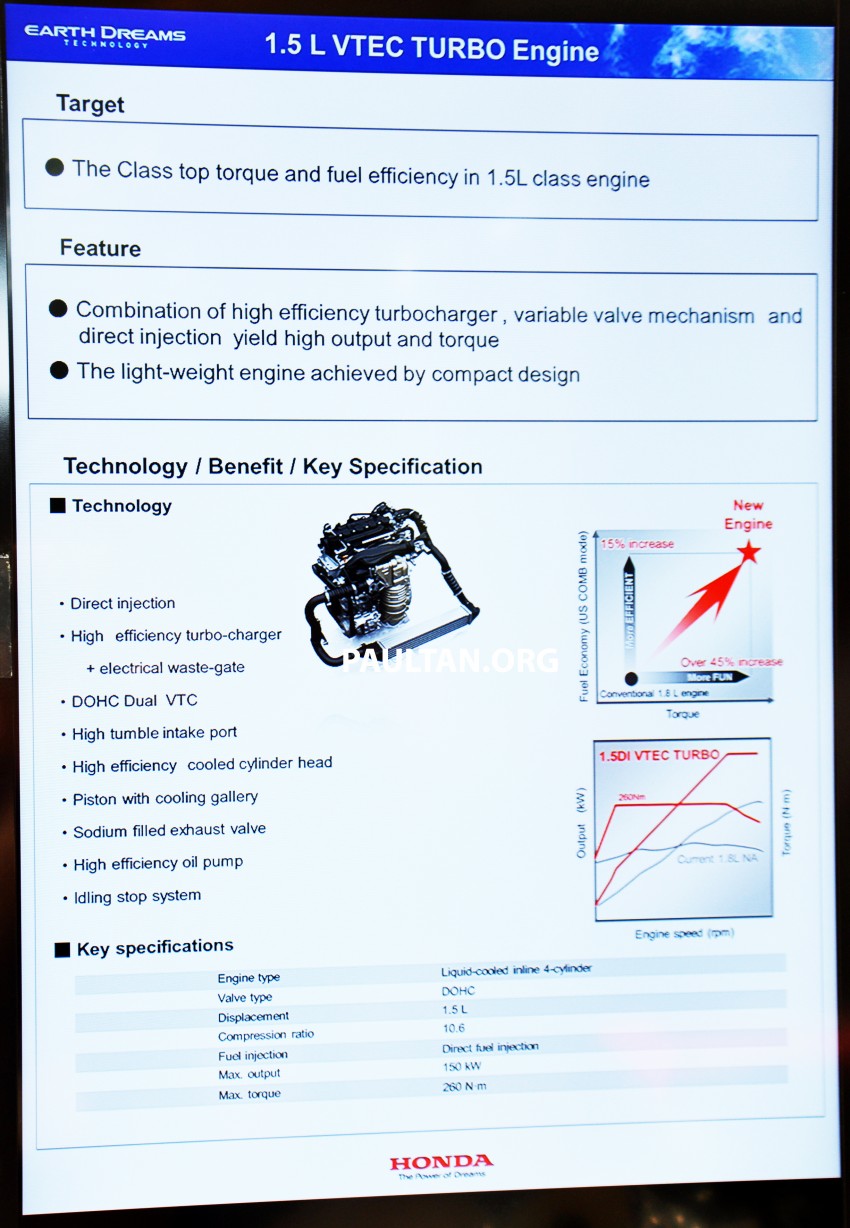