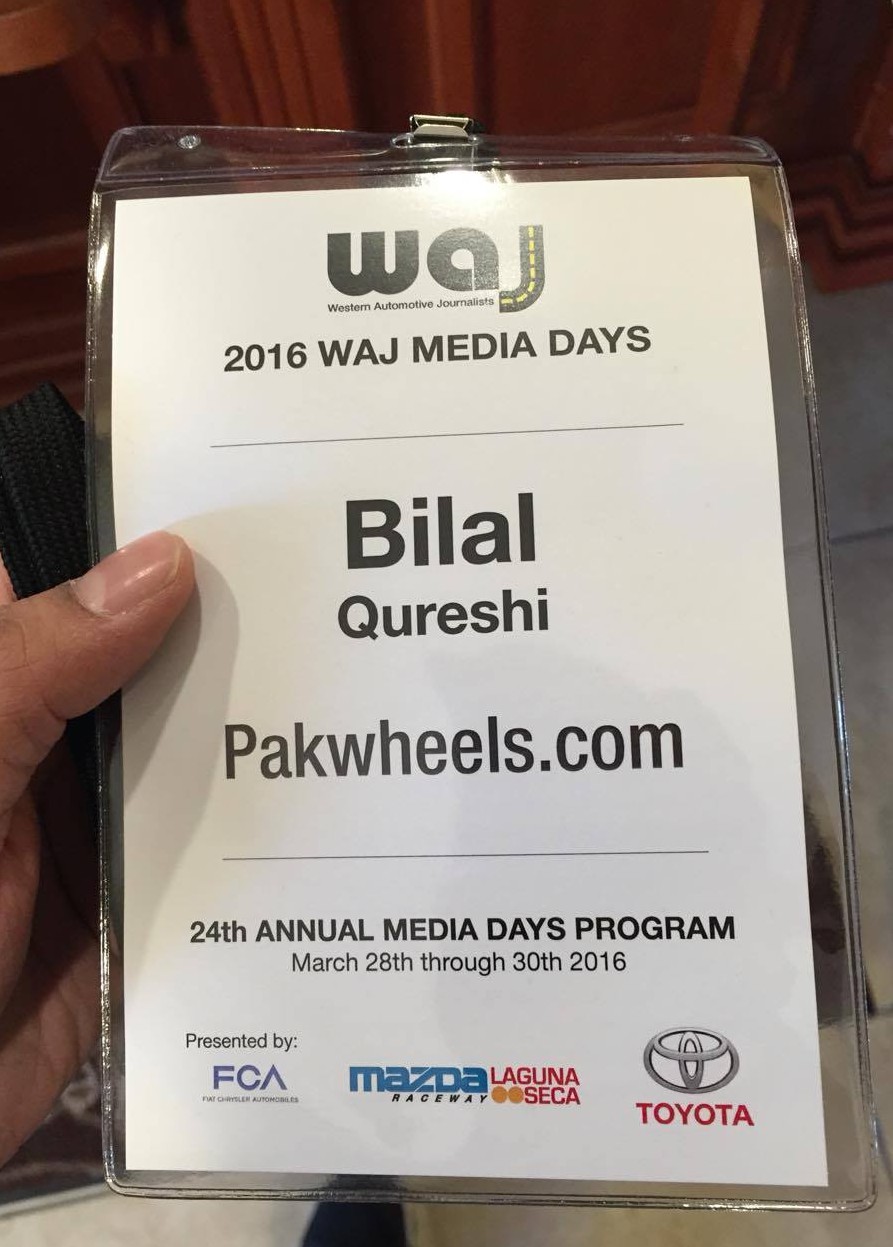 Back in March, I represented PakWheels.com at the Western Automotive Journalists (WAJ) Media Day, a day in which I received access to industry insiders from Nissan, Mercedes-Benz, Acura, Honda, Cadillac, and Chevrolet among others. The event provided journalists the opportunity to gain more knowledge about the automotive industry at large, and to sample of today’s best cars on public roads and on Mazda Raceway Laguna Seca.

Without further suspense, below are briefly detailed reviews of the best cars I drove in those days.

For the 10th generation Civic, Honda delivered leaps and bounds over the rather average 9th generation Honda Civic, re-cementing consumer opinions of the brand, and re-igniting interest from the enthusiast community. Familiar ride and suspension character, together with an all-new turbocharged 4 pot gave few hints of the Civic being simply a compact family hauler. For our full road test and thoughts on the 10th generation Civic, hop on over to Fazal Wahab’s piece from November 2015. 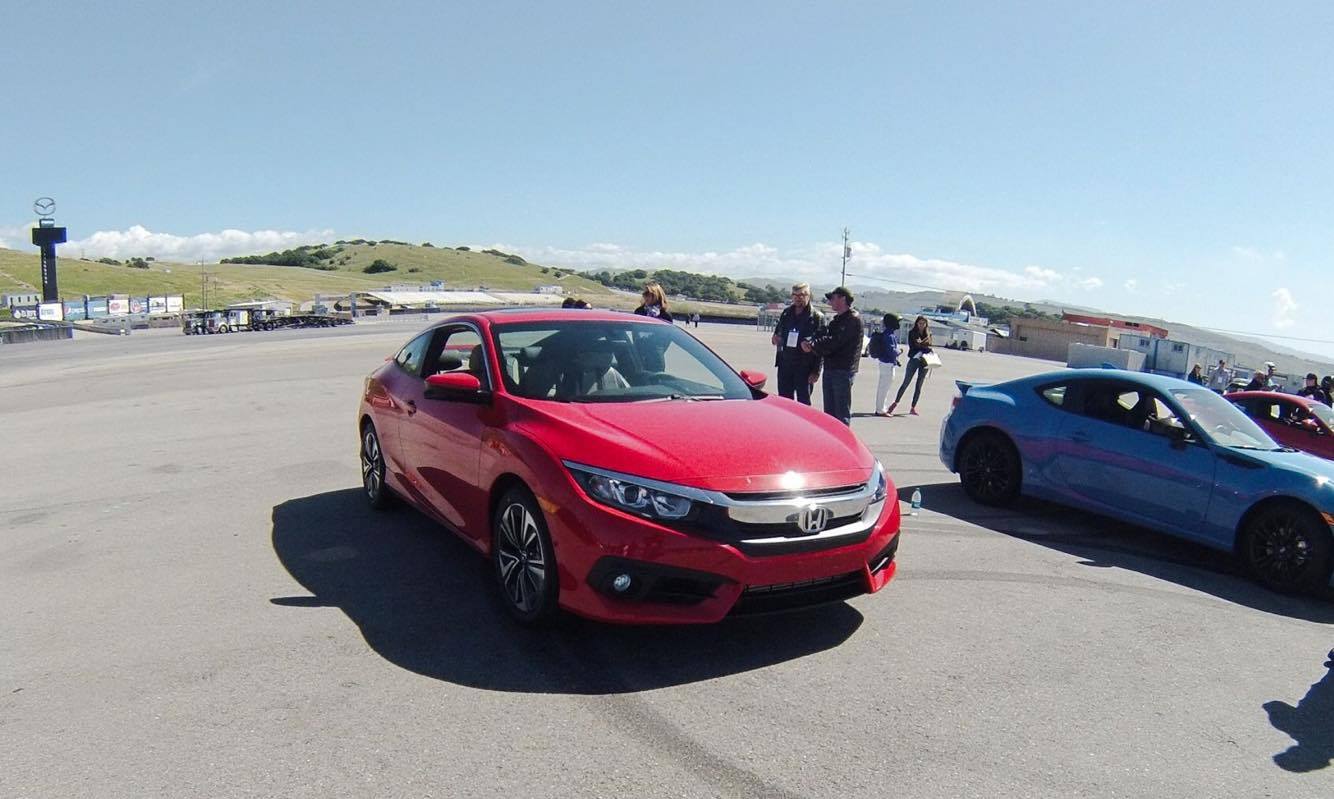 My press-car was a Civic Touring Coupe with the new 1.5L Turbo-4 mated to Honda’s 6 position CVT gearbox, and its agility was thoroughly tested through the 11 corners of Mazda Raceway Laguna Seca. Through the first few corners, the Civic felt featherweight; poised and quick to change direction, easy to brake and accelerate. With the CVT settled in L through the two laps I could easily extract every morsel of boost from the small turbo, and push smoothly up the 2.2-mile long course. And while the first half was of the lap was driven with ease, the second half of the lap fully demanded the Civics suspension, tire, and driver capability. From turn 5 leading all up to the Corkscrew, it darted quickly into the left handed corners, its low weight making it almost float uphill. Through the infamous Corkscrew corner itself, the front-end plunged down and dug into the pavement as I mashed the right pedal to the floor and the carried the car cleanly down the 5 story drop! Hurtling towards the high-G force, left-hand turn 8, the Civic scampered down as I kept the throttle pinned, but a bit of understeer at the limit of grip forced me to correct. Here, I felt a lack of feedback from the weighted but dull electronic steering, because I was missing vital communication from the front tires.

At the end of the two laps however, I was sold on the new Civic as a whole package. The sleek design and wide profile give it a great look, the new engine choices give it gusto, and the engaging ride characteristics make it the best Civic to date.

This isn’t a Mercedes that should be sold to the regular public. No, not in a million years should the keys to this mammoth of a powertrain be unleashed onto the unsuspecting and untrained populous of this planet. But worldwide, every year, AMG shifts tens of thousands of their highly tuned machines, and they’re lauded as being the final word in production muscle cars. What makes them so great, why are they a staple of every German car discussion? Given the keys to the AMG C63 S and the AMG GT-S, I sought out for answers. 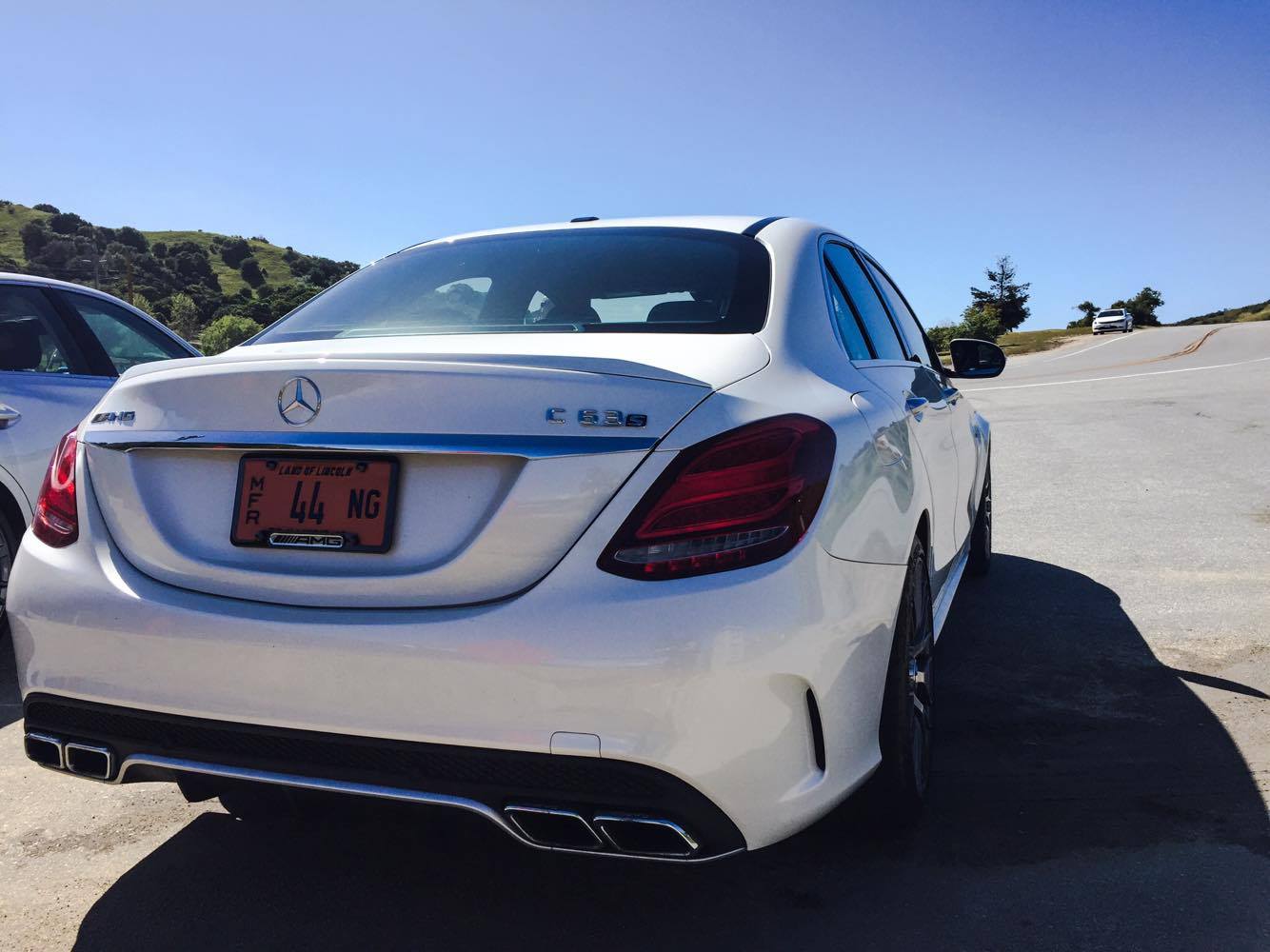 I discussed the merits of the C63 S with a fellow auto journalist as we drove through the hillside curves in picturesque Monterey, CA. We doled out opinions on the departure of AMG’s 6.2L engine now absent from its lineup, and cruised at a calm 50 mph behind a dented green Toyota Tercel. Certainly the 6.2L will be missed, but I much prefer the new downsized approach to the 4.0L bi-turbo V8, pushing out north of 50 horsepower more than its predecessor, all while thundering out the same exhaust note from the tailpipes.

But the frustration remained that while I had 500 horsepower ready at my disposal, we were still stuck behind that damn Tercel! And that’s where we spent our entire 20 minute journey to Laguna Seca, arriving at the obvious conclusion that the C63 S is horrendously, amazingly, shockingly impractical for day-to-day use. At no point could I reach the ‘limit of adhesion’, and I’m confident the police Dodge Chargers would’ve shut me down had I dared. And don’t let the start-stop feature fool you; the V8 up front is thirsty like a prom date. As it sat ticking itself cool outside of Mazda Raceway Laguna Seca, I admired its presence and how the design language had transformed from the C Class being a practical four-door sedan to a luxurious one. But the AMG is not one to simply tout luxury, it must instill a raw emotion within its driver. For this car to come alive, for it to jolt your senses awake, it needed to be unleashed on Mazda Raceway Laguna Seca.

Here, the animal is unchained from the throngs of society and its road networks, to be let loose in its natural habitat. With ‘Sport +’ and manual mode on the transmission dialed in, I staged out from pit lane readied to exit onto the track. A grey BMW 340i was given plenty of run room ahead of me so traffic couldn’t prevent from attacking short 2 mile circuit. Track cleared, I shifted into 3rd gear and progressed into and out of turns 3 and 4.

A surge of adrenaline flowed through my system as I opened the V8 up through the exit of turn 4, seeing the red needle on the speedometer roll swiftly past 50… 60… 70…  then 80 miles an hour as I jumped on brake pedal to queue up the entry into turn 5. Uphill into turns 6 and 7 are no problem for the torque heavy V8, and the Corkscrew is over after simple left-right swings onto the light steering wheel; it truly is light work for the nearly 2 ton C63 S to move through the most challenging corner on this track. 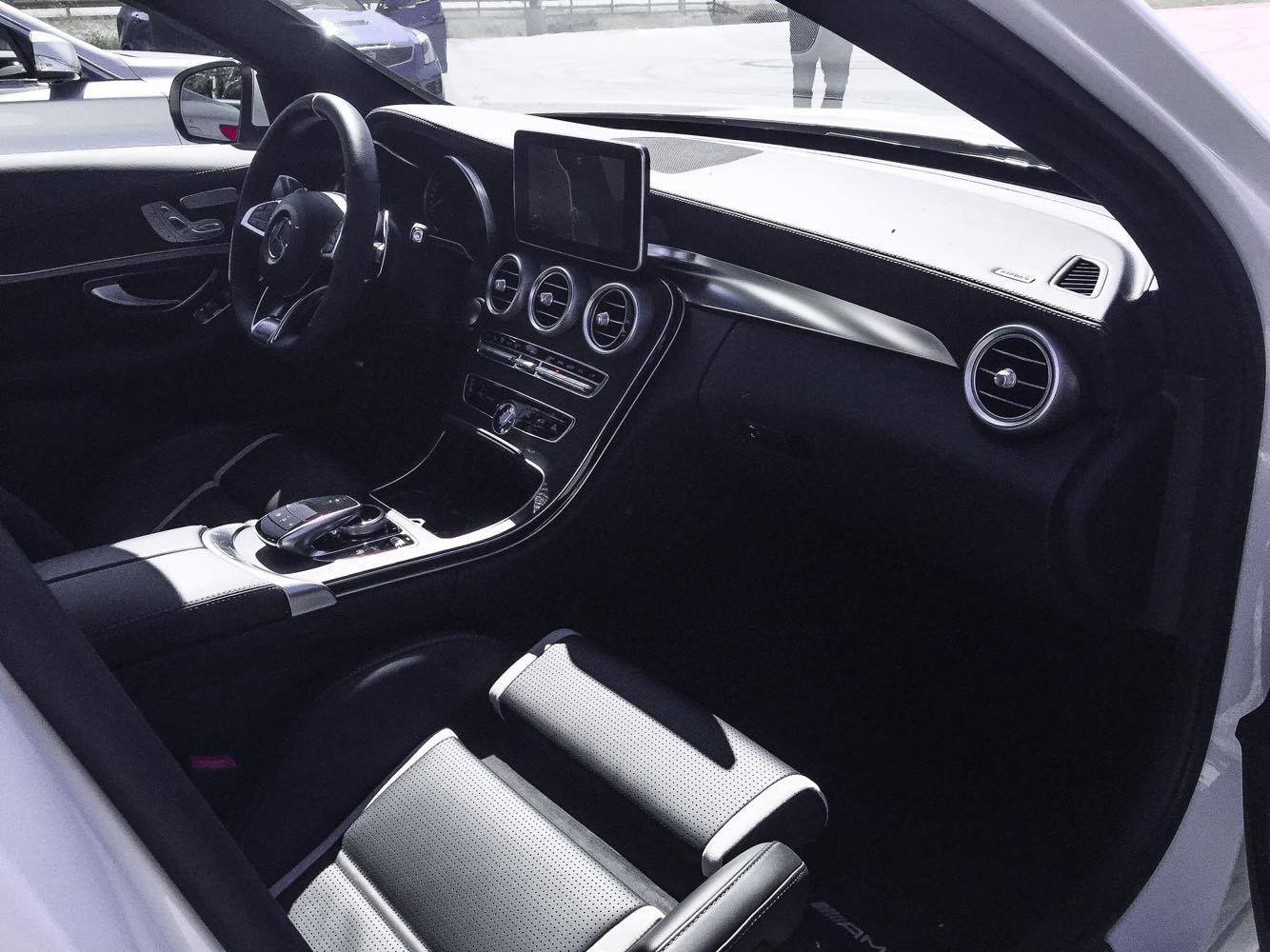 I completed my first lap and pulled away from turn 11, and the AMG V8 grunted up the gears as I picked speed up on the longest straight on Laguna Seca. The AMG flew past the start/finish line with my foot firmly down on the pedal, and I peeked an 80 mph indication from the speed readout as it continued climbing. As I got on the brakes far from the brake marker, the grey BMW 340i grew larger in my line of sight. My smirk grew, and I gripped the steering wheel and picked up the pace out of turn 2, feeling the Mercedes’ rear end twitch as I gave chase to the 340i.

It appeared I had a buddy to spar with.

Tough is the task for anyone to provide an objective, unbiased review when given the keys to an AMG GT-S. I also feel unqualified for passing opinion on the GT-S’ track prowess given my lack of track-driving experience outside of Gran Turismo 6. But my 2 laps with the car gave me an excellent idea as to what sets the AMG GT-S apart from anything I’d driven to date.

I pressed the start button to fire the engine into life, and the whole car shook as the cabin became enveloped with a deep V8 idle. To my left was a raised center console covered with knobs and buttons to change the AMG’s ride and handling. Outside the windscreen was a long bulging hood, holding within it AMG’s newest 4.0L biturbo V8. 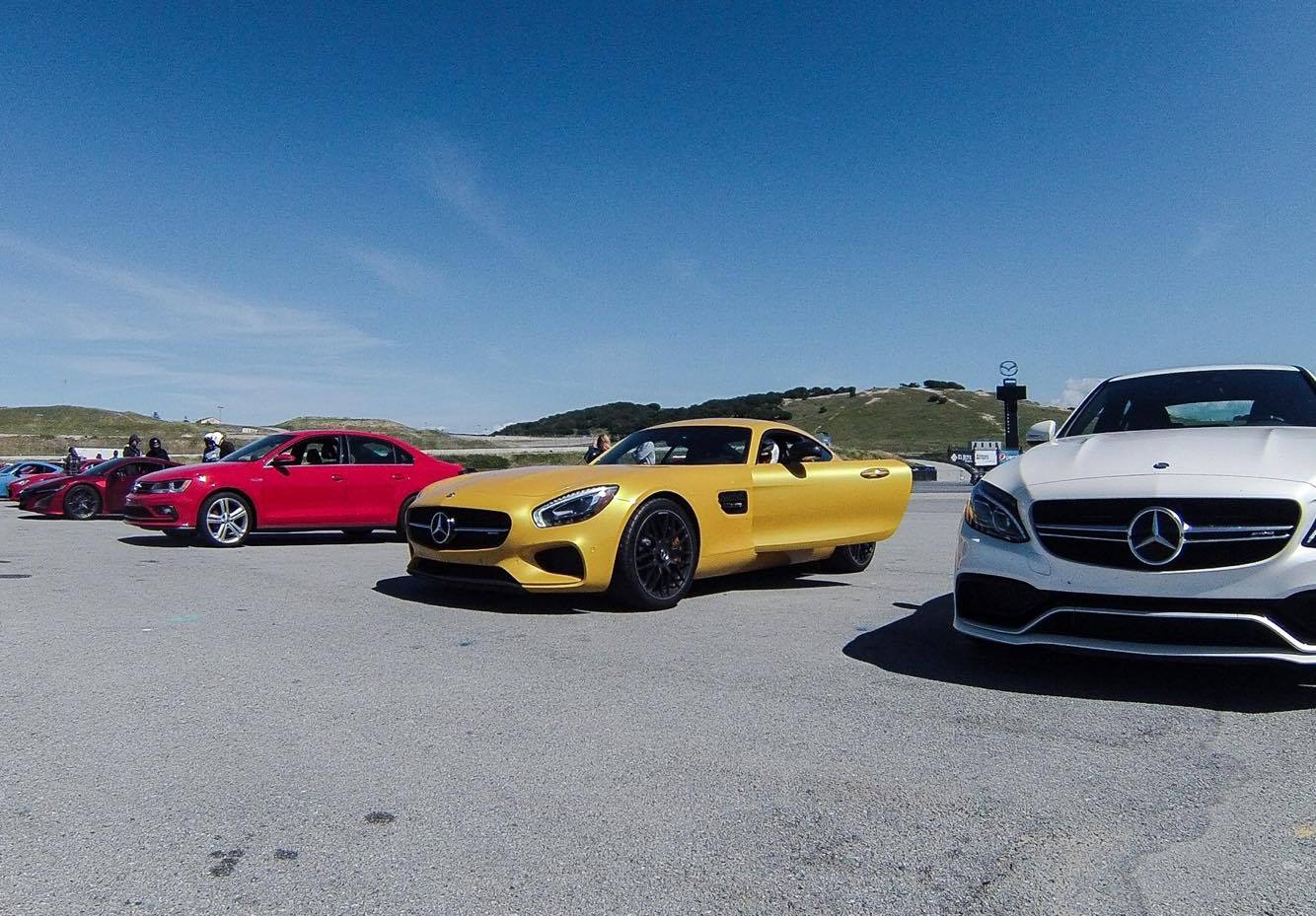 This car is a thing of beauty, both from the inside and out. Enough can’t be said about its new swooping rear-end with thin stripe taillights, and of the beautifully upholstered interior with leather-everything. Evolved significantly from the SLS AMG, the AMG GTS’s design is smoother around the edges, and a more sophisticated final product.

The AMG GT-S’s transverse axle layout place the Getrag eight-speed gearbox on the rear axle, providing excellent balance and poise to the chassis through every corner at Laguna Seca. The steering is hydraulic (hydraulic!) and it loads up on turn-ins through fast corners like turn 9, but also feels soft and supple at low speeds through turn 11. The 503 horsepower V8 surges you up the hill through Rahal Straight leading into the Corkscrew, and the exhaust lets out a burp as it gearbox finds the next cog shooting up the hill. It isn’t tough to drive fast, but in a sort of classic AMG fashion, never lets you forget the inevitable consequences of flirting with the limit of traction. Powering out of the downhill Corkscrew, the traction control light flickered through the 2nd and 3rd gear pulls with my foot hard down. Had the systems been off, I’m sure the back would’ve come around!

The AMG sets itself apart from any other car within the segment by delivering a package which marries time-tested brute force with clever engine and suspension management technology. I couldn’t stop admiring its daring looks and the noise from the engine. The new turbocharged family of V8’s are superb, and deliver brutal power with no turbo lag whatsoever, and the robust (near-race) suspension keeps the car leveled to provide the driver with unmatched confidence in their abilities.

It remains one of the most unforgettable experiences I’ve ever had. 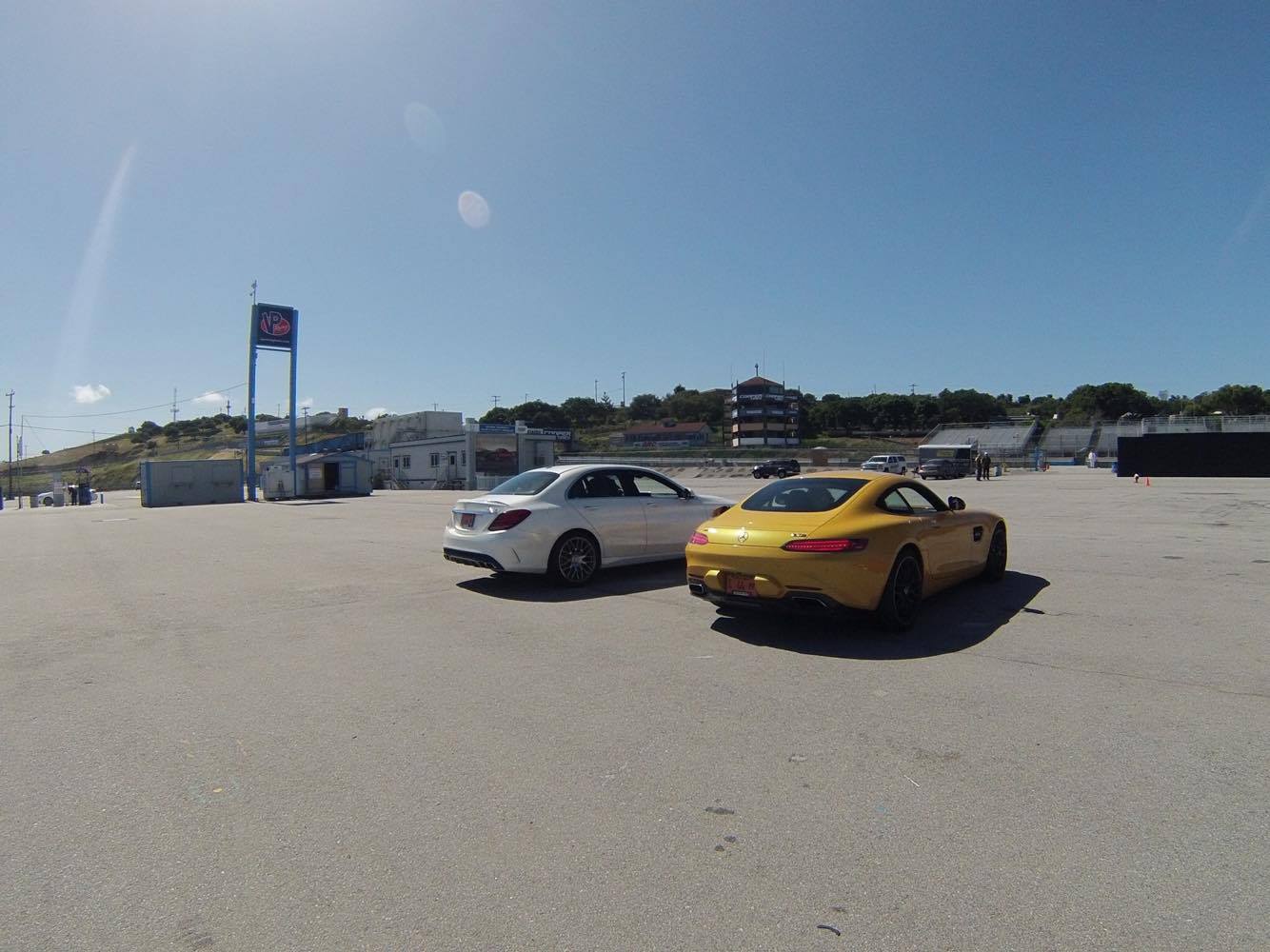